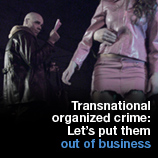 19 July 2012 - The exploitation of human beings is a highly lucrative business for organized criminal groups. As a new UNODC campaign launched this week highlights, it is an illicit market which affects millions of victims worldwide every year. With traffickers making an estimated $32 billion annually, human trafficking is one of the world's most shameful crimes and one which robs people of their dignity and basic rights.

Developed to raise awareness around transnational organized crime, the campaign highlights some of the key threats being faced today - with human trafficking one of the leading concerns. The campaign, which can be seen on www.unodc.org/toc, includes a new video which is being rolled out online ( www.youtube.com/unodc) and through international broadcasters and illustrates the key financial and social costs of this international issue.

While the best-known form of human trafficking is for the purpose of sexual exploitation, hundreds of thousands of victims are also trafficked for forced labour, domestic servitude, child begging or the removal of their organs. The many different types of human trafficking means that there is no single, typical victim profile. Cases are seen in all parts of the world and victims are targeted irrespective of gender, age or background. Children, for example, might be trafficked from Eastern to Western Europe for the purpose of begging or as pickpockets; while young girls from Africa could be deceived with promises of modelling or au pair jobs only to find themselves trapped in a world of sexual and pornographic exploitation.

A central component of the campaign is driving action against transnational organized crime. It calls not just on Government authorities to act, but also highlights the role of communities and individuals.

Some of the steps that the campaign suggests in tackling human trafficking include:

As the guardian of the United Nations Convention on Transnational Organized Crime and the Protocol to Prevent, Suppress and Punish Trafficking in Persons, Especially Women and Children, supplementing Convention, UNODC has been at the forefront in tackling human trafficking. UNODC offers practical help to Member States, not only by helping to draft laws and create comprehensive national anti-trafficking strategies but also assisting with resources to implement them. At the national level, countries continue to implement the Protocol and work towards integrating anti-human trafficking legislation into their domestic laws.

Towards the end of 2012, UNODC will be publishing a new global report on trafficking in persons. Based on data collected from Member States, the report will provide a basis for evaluating how trends have changed since the last global UNODC data collection exercise in 2009 and will provide guidance as to what remains to be done.

UNODC also manages the United Nations Voluntary Trust Fund for Victims of Human Trafficking (especially women and children). Officially launched in 2010 by Secretary-General Ban Ki-moon, the Trust Fund supports the provision of on-the-ground humanitarian, legal and financial aid to victims of trafficking and provides members of the public an avenue through which they can donate to this important cause.