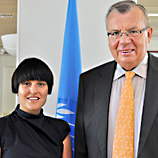 6 July 2012 - Yury Fedotov, Executive Director of UNODC, today met Bianca Kopp, a UNODC staff member, who will bear the London Olympic torch on 15 July as it makes its way through the coastal town of Portsmouth in the United Kingdom. Kopp, an Austrian national, survived a terrorist attack on the United Nations House in Abuja, Nigeria, on 26 August 2011. The attack killed 25 people, including UNODC staff member Ingrid Midtgaard from Norway and 12 other United Nations staff, and seriously injured more than 60 people. At the time of the attack, over 400 people were working in the building, which housed at least 26 United Nations humanitarian organizations and agencies.

Mr. Fedotov, who nominated Bianca to carry the Olympic torch on behalf of UNODC, said, "I praise Bianca for her humanity and indomitable spirit. She was a source of strength and support to her colleagues that fateful day. Through her actions, Bianca embodies the qualities of a UN staff member."

The Executive Director expressed his unequivocal condemnation of terrorism and said that such acts would not deter the United Nations from striving to bring about peace, justice and development throughout the world.  Since 2003, UNODC has been working to help countries to counter global terrorism. The Office has assisted almost 170 countries in adopting and implementing legal instruments against terrorism.

Mr. Fedotov stated that the security of his personnel was of paramount importance, saying that UNODC had field offices in some of the world's most dangerous places. He was concerned for the protection and safety of staff members carrying out important work in fulfilment of the mandates entrusted to the Office by Member States.

The Olympic flame, which stands for peace, unity and friendship, is being carried by 8,000 inspirational torchbearers. The Portsmouth stretch is part of the Olympic Torch Relay leading to the grand opening ceremony of the 2012 London Olympic Games.

"The Olympic torch for me symbolizes our resolve and unending hope to carry on of the work of our fallen colleagues. Our 'flame of hope' lives on," Bianca affirmed.

Mr. Fedotov assured Bianca that along with the torch, she would be carrying with her his best wishes and those of his Office.