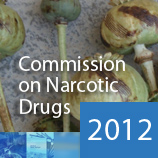 14 March 2012 -  Delegates attending the 55th session of the Commission on Narcotic Drugs taking place in Vienna this week yesterday commemorated the centenary of the Hague Opium Convention signed in 1912.  Also known as the International Opium Convention, it formally established narcotics control as a fundamental element of international law.

The Convention entered into force in 1915 to become the first binding international legal instrument governing the shipment of narcotic drugs for medical  purposes. It established the groundwork for the evolving international system of drug control. Several other conventions, protocols and agreements followed; and UNODC and the International Narcotics Board have contributed to the global efforts by supporting Member States in implementing their obligations under the conventions.

"Much has been done in the period between the Hague Convention and today. Nevertheless, challenges remain," said UNODC Chief Yury Fedotov. He cited the increasing number of substances capable of damaging health, not all of which are under international control; the sophistication of criminal organizations, and the fact that the world can no longer be divided into origin, transit and destination countries.

"Sadly, the illicit manufacture and illicit consumption of drugs occur everywhere. And, no one country is large enough to deal with these transnational issues," he added. The Executive Director called for shared responsibility for dealing with the supply and demand aspects of drug control, noting: "we need more international cooperation, not less. We need to stand together in order to benefit from our efforts on drug supply and demand."

The 1912 Hague Convention was superseded by the 1961 Single Convention on Narcotic Drugs, which consolidated the existing instruments into a single convention. The 1971 Convention supplementing the Single Convention established control mechanisms to deal with psychotropic substances. Both these treaties allowed for controlled substances to be used for medical and scientific purposes, while preventing their illicit use, due to the negative effects on health.

Speech by President of the International Narcotics Control Board, Prof. Hamid Ghodse (pdf)

Statement by Michel Perron, Chair of the Vienna NGO Committee on Drugs