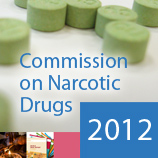 7 March 2012 - Strengthening the drug programme of UNODC will be the focus of the fifty-fifth session of the Commission on Narcotic Drugs (CND), which will meet in Vienna from 12 to 16 March. The CND is the central policymaking body within the United Nations system dealing with illicit drugs and is the governing body for the work of UNODC in the area of drugs.

Ministers and top counter-narcotics officials from the 53 member States of the Commission will discuss issues ranging from international cooperation in combating drugs to public health and safety concerns and prevention of the diversion of chemicals for use in the manufacture of illicit drugs.

On Monday 12 March there will be a press conference by UNODC Executive Director Yury Fedotov and the Chairperson of the fifty-fifth session of CND, Ambassador Carmen Buján Freire of Spain.

A number of side events will be held during the session, including an event to mark the 100th anniversary of the signing of the International Opium Convention and events addressing the threats and challenges of new psychoactive substances, the rights of children to be protected from illicit drugs, driving while intoxicated by drugs and the strengthening of demand reduction policies as the basis for national policies against drugs.