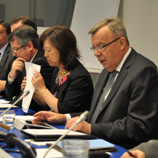 The regional programme will focus on the southern corridor of the Afghan heroin trade, which for the past 30 years has been a major heroin trafficking route from Afghanistan to the lucrative markets of Western Europe and the Russian Federation. UNODC estimates that in 2009 about 60 tons of heroin, with a market value of approximately $13 billion, were smuggled through South-Eastern Europe. Organized crime groups have gone beyond the heroin trade and have established illicit networks for smuggling other drugs, weapons, counterfeit goods and human beings.

The regional programme will concentrate on countering drug trafficking and organized crime; the enhancement of integrity and justice; and prevention, treatment and care for drug users and those infected with HIV/AIDS.

Speaking at the launch, UNODC Executive Director Yury Fedotov said that countering trafficking in narcotics was a matter of joint responsibility and that it was in everybody's interest to stop such trafficking. "UNODC has unique comparative advantages in bringing together partners from the East and from the West. Only joint intra- and interregional cooperation will allow effective curbing of the problem of drug trafficking from Afghanistan," he said.

The UNODC regional programme framework for South-Eastern Europe is aimed at countering drug trafficking and organized crime by promoting regional cooperation, including with the European Union and regional bodies, and supporting regional and country-level capacity-building, as well as strengthening related capacities in the justice and health sectors of Governments in the region.

Mr. Fedotov stated that it was crucial to provide a comprehensive and consolidated response to drug trafficking and related crime. UNODC brought added value in that context in view of its solid presence in Central and West Asia through its regional programme for Afghanistan and neighbouring countries, the Central Asian Regional Information Coordination Centre, the Triangular Initiative and its joint planning cell, the Tajik Drug Control Agency, the Kyrgyz State Drug Control Service and other mechanisms.

South-Eastern Europe, said Mr. Fedotov, could only benefit from closer cooperation with enforcement operations along the entire trafficking chain, within the principle of shared responsibility.