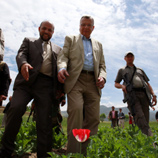 31 May 2012 - UNODC Executive Director, Yury Fedotov, visited an opium poppy field in Badakhshan province, north-eastern Afghanistan, and saw first-hand the eradication by the Counter-Narcotics Police of Afghanistan and the hardships faced by opium poppy growers.

"This is my third visit to Afghanistan, but the first visit to one of the Afghan provinces", said Mr. Fedotov. In Badakshan, the UNODC Executive Director also visited the Aga Khan Foundation alternative livelihoods project in the Baharak district.

"Several years ago, over 70 per cent of the land in our village was under opium poppy cultivation", said Ustad Achina, a former opium poppy grower who is today a successful orchard and fruit tree nursery owner in the Baharak district.

The Aga Khan Foundation supported Mr. Achina by importing new varieties of fruits (apples, cherries, pears, apricots etc.), which he cultivated successfully in his orchard. Mr. Achina now earns between $4,000 and $5,000 every year from the nursery.

Earlier this week, the Executive Director launched the UNODC country programme for Afghanistan for the period 2012-2014. Primarily aimed at the provinces of Afghanistan, the programme will support alternative livelihoods and health-care projects to benefit communities. The focus will be on creating alternatives for households dependent on illicit crop cultivation, reducing drug demand, and preventing and treating drug-related HIV.

"Some of the problems in Badakshan can be addressed though our programmes, such as the regional programme and the country programme, which is the largest donor-funded UNODC programme globally", said Mr. Fedotov. The Executive Director said he hoped the country programme would help improve the lives of people and open up more opportunities for prosperity. 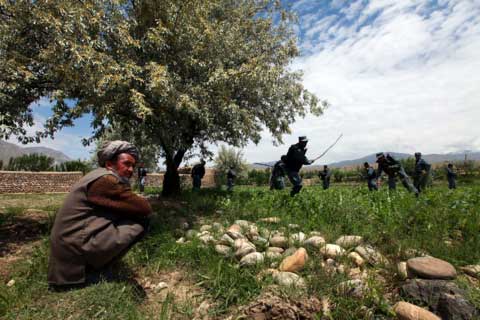 Mr. Fedotov noted with concern the increase in opium poppy cultivation in Badakhshan. He added that since opium poppy cultivation had been concentrated in the southern part of Afghanistan in the last 10 years, increasing cultivation in other areas, such as in the provinces of Badakhshan and Nangarhar, needed to be monitored carefully. Two north-eastern provinces, Faryab and Baghan, lost their opium poppy-free status last year and were unlikely to regain it in 2012. While northern Afghanistan is mostly opium poppy-free, it is a key trafficking route for Afghan opiates.

Mr. Fedotov added that gains made in the past could be under threat, and the international community needed to step up its support to farmers to wean them off opium poppy cultivation and eventually reverse the increase in such cultivation.

"We must step up our awareness campaigns and provision of agricultural assistance in the form of seed, fertilizers and irrigation facilities to encourage opium poppy farmers to pursue alternative livelihoods," he said.

Mr. Fedotov crossed the bridge over the Panj River, which divides Afghanistan and Tajikistan, and headed towards Dushanbe to attend a ministerial meeting on regional counter-narcotics cooperation between Afghanistan, Tajikistan and Kyrgyzstan.