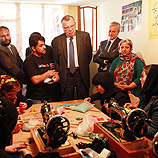 30 May 2012 - Emini, who is 20 years old, is one of 14 female residents of the House of Hope, a Kabul-based transitional house for women leaving prison. Pardoned by President Hamid Karzai's decree on 8 March, she is one of the newest inhabitants of the house. Originally sentenced to three years in prison for running away from an abusive husband and his family, Emini hopes that her defence lawyer will help her to be granted a divorce, and that her father will forgive her and allow her to return home.

During his visit to Afghanistan, UNODC Executive Director Yury Fedotov visited House of Hope and praised Women for Afghan Women, a local non-governmental organization, for the important work they are doing to assist women recently released from prison, as well as their children.

"Your work on the ground is very important.  You are helping real people and, at the same time, promoting and protecting women's rights in Afghanistan," said Mr. Fedotov.

UNODC, in partnership with relevant Government ministries, supported the implementation of two post-release transition houses in Mazar-e-Sharif and Kabul for women leaving prison. In June 2010, Women for Afghan Women began implementing the programmes under the supervision of UNODC and with funding from the Government of Canada. Although the funding ended in October 2011, Women for Afghan Women has sustained the programmes, owing to the recognition of the value they have in providing a place of transition for women leaving prisons. In April 2012,  the United States granted the organization funding to continue the programme through 2012.

At the shelter, Emini and other women are provided with vocational training and literacy classes. Additionally, the programme is also aimed at providing a glide path to released women and their children for them to be safe, develop life skills and secure employment that will guide them towards being stable and independent.

As of January 2012, Afghanistan's prisons housed approximately 637 women and 260 minors who reside with them. According to the recent Human Rights Watch report "I Had to Run Away", some 400 women and girls were imprisoned for moral crimes as of January 2012.