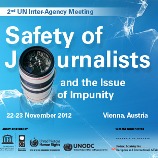 22 October 2012 - Against a backdrop of mounting violence against journalists, media practitioners and bloggers, the 2nd UN Inter-Agency Meeting on the Safety of Journalists and the Issue of Impunity is taking place in Vienna as part of international efforts to stem the surge.

A hundred lives were lost in the first 10 months of 2012 alone according to the United Nations Educational, Scientific and Cultural Organization (UNESCO). More than 600 journalists and media workers have been killed in the last ten years; in other words, on average every week a journalist loses his or her life for bringing news and information to the public, says the agency. Many others are wounded, raped, abducted, harassed, intimidated or illegally arrested.

"Complex issues such as these dealt with by UNODC require that the media give full and accurate information to citizens in a comprehensive and timely manner. And this can only be done if they can practice their profession freely and safely. Silencing a journalist denies the rights of the journalist and also jeopardizes the right of society to be informed", said Sandeep Chawla, Deputy Executive Director of UNODC, adding that free and independent media play a key role in investigating and exposing corruption.

Attacks on independent reporting strike at the heart of fundamental human rights, such as freedom of expression. Summary and extra-judicial executions create a climate of lawlessness that undermine the rule of law.

Mexico, which, national authorities say has seen 95 journalists murdered, 14 "disappeared", 13 kidnapped and 24 media facilities attacked in the past 12 years, has borne the brunt of such violence. UNODC is therefore working with the Government of Mexico, together with UNESCO and the Office of the High Commissioner for Human Rights (OHCHR), to increase safety for journalists.

In 2011, the joint initiative supported by the Ministry of Interior started to investigate such threats. This led to the creation of a multidisciplinary committee, including UN agencies and national ministries, which has helped elaborate a new federal law to protect journalists; establish a National Special Commission for the Monitoring of Aggressions against Journalists and the Media; and devise a draft national strategy and plan to address the issue.

Today's event, which is aimed at devising a United Nations Implementation Strategy on the Safety of Journalists and the Issue of Impunity for 2013-2014, was convened by UNESCO and co-hosted by OHCHR, UNODC and the United Nations Development Programme.

The UN approved the first UN Plan of Action on the Safety of Journalists and the Issue of Impunity in April 2012 in a process spearheaded by UNESCO. The Plan of Action includes measures, such as the establishment of an inter-agency mechanism to handle issues related to the safety of journalists; assisting countries to develop legislation and mechanisms conducive to freedom of expression and information, and supporting their efforts to implement existing international rules and principles.