Crafting global approaches to crime and building cooperation: key themes at the sixth session of the Conference of Parties to the United Nations Convention against Transnational Organized Crime 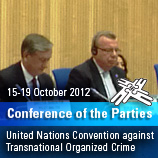 15 October 2012 - UNODC Executive Director Yury Fedotov today said that crime preyed on countries where the rule of law and other institutions were vulnerable to criminals. The remarks were made at the sixth session of the Conference of the Parties to the United Nations Convention against Transnational Organized Crime.

The victims of these crimes, he said, were the women and children trafficked for sex, local communities in developing countries devastated by illegal logging and loved ones and friends who had lost someone to illicit drugs.

"We are able to quantify the cost of transnational organized crime: it is $870 billion, but we cannot calculate the misery and suffering caused to millions of people by these illicit activities," said Mr. Fedotov.

Mr. Fedotov went on to say that it was important to recognize that crime was smart, sophisticated and largely opportunistic. Crime was capable of moving when successfully challenged. To prevent its perpetual displacement, he said there was a need to deliver timely strategic activities in an integrated manner. Civil society also had an indispensible role to play in solving the challenges of transnational organized crime.

To achieve those aims, he called on Member States to be creative and proactive in the exchange of ideas and information on what was working in the global fight against drugs and crime. "We must take lessons learned and create practical policies," noted Mr. Fedotov.

Mr. Fedotov stressed: "Our collective goal must be to end the 'era of displacement', which sees crime simply move elsewhere when challenged, and to begin a time of interconnected cooperation, coordination and communication against crime. Where the criminals are smart, we must be smarter. Where the criminals are sophisticated, we must be even more sophisticated, and where crime transcends borders, so must our cooperation."

He completed his remarks by saying there needed to be greater intelligence-sharing and better witness protection and assistance to the victims of transnational organized crime.

In his own speech, President Danilo Türk of Slovenia said: "International organized crime is a significant threat to international peace and prosperity. Despite our commitment 12 years ago in Palermo to work together to fight the scourge of transnational organized crime, the challenge still persists: organized crime is gaining in sophistication, range and viciousness. This shows that there are still gaps in our legislation, our law enforcement and in the judicial and law enforcement cooperation among countries."

Mr. Fedotov and President Türk were speaking at the beginning of the Conference, which will be attended by 800 people, including permanent representatives and members of civil society. During the conference, which runs from 15 to 19 October, participants will discuss a variety of crime-related issues.

A new global awareness-raising campaign emphasizing the size and cost of transnational organized crime was launched by UNODC earlier this year. To view the video go to: www.unodc.org/toc/en/videos.html.