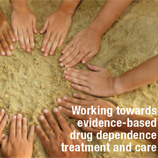 The initiative will provide access to UNODC international standards on drug use prevention, which are to be launched at a later date, as well as support evidence-based national drug prevention systems. The standards are being drafted to offer guidance on policies and interventions that can be used to prevent drug use and promote healthy lifestyles, particularly among young people.

Through the initiative, which will kick off in Central America, North Africa, Central Asia and East Asia, the two organizations will create regional prevention hubs connecting and training policymakers in an effort to provide them with tools to improve their national prevention systems, including an archive of effective drug prevention sample programmes and materials.

"This meeting is the start of a process on how we can translate the provisions of the international drug conventions into more firm and targeted actions to protect the health of people," said Mr. Fedotov. "Together, UNODC, other United Nations entities and Member States are striving to provide a balanced approach to illicit drugs, an approach that focuses on demand reduction and seeks to deliver treatment, rehabilitation and reintegration for those suffering from drug addiction," he added.

Mr. Fedotov noted that drug use was a youth problem in most countries, with prevalence rates increasing through the teenage years, peaking among persons aged 18 to 25 and eventually declining with age.

Mr. Fedotov said that, despite some progress, the situation remained serious. "Cannabis use among young people in North America, Africa and Asia may be on the increase. Ecstasy remains popular, particularly in affluent societies. Amphetamine-type stimulants continue to be a major problem in Asia, including among young people, and the non-medical use of prescription drugs is increasing in many parts of the world."

The UNODC chief noted that, in many cases, the resources for drug prevention were extremely scarce, but that science-based evidence showed that drug prevention worked. "Drug prevention is incredibly cost-effective. For every dollar spent, we save at least 10 dollars in terms of future health and the costs of crime. Drug prevention interventions at an early stage can help reduce the number of people in prison, improve security and safety, and reduce the mental health burden, among others," he said.

The meeting was attended by Andrea Riccardi, Italian Minister for International Cooperation and Integration Policies; Giulio Terzi di Sant'Agata, the Minister for Foreign Affairs of Italy; Mr. Fedotov; Raymond Yans, the President of the International Narcotics Control Board; and heads of national drug control agencies.