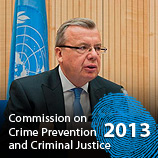 22 April 2013 - Opening the Twenty-Second session of the Commission on Crime Prevention and Criminal Justice, the Executive Director of the United Nations Office on Drugs and Crime (UNODC) Yury Fedotov focused on the impact of crime on social and economic development: "We know that weak and fragile states, especially those damaged by conflict, are more vulnerable to drugs and crime. And we know that crime undermines sustainable development, hinders access to education and employment, and drives away foreign and domestic investors."

A consensus was emerging, Mr. Fedotov said, for the rule of law to be integrated into the post-2015 agenda. He drew attention to the high level review of the Millennium Development Goals in 2015 and said the international community was approaching an important milestone in its collective goal to promote development. Mr. Fedotov also noted that the 13th UN Congress on Crime Prevention and Criminal Justice, was also being held in Qatar in 2015.  "We must take advantage of this to ensure that our work in the area of the rule of law and justice is properly aligned to sustainable social and economic development," he said.

In another part of the speech, Mr. Fedotov said UNODC continues to confront emerging crimes, as well as existing crimes that are diversifying throughout the world. These included the growth of fraudulent medicines, illegal trade in declining numbers of wildlife, terrorism, and trafficking in human beings, small arms and cultural artefacts, among others. "Interrupting the flow of crime proceeds is a necessity. We cannot allow the criminals and their networks to prosper from their crimes or to fund other illicit activities," said Mr. Fedotov.

Commenting on the response to organized crime. Mr. Fedotov said all of UNODC's work was founded on the UN Convention against Transnational Organized Crime, but activities were channelled through its integrated Regional Programmes. "Regional Programmes offer a delivery system for crime prevention and criminal justice activities to be mainstreamed into areas such as development, security and governance." said Mr. Fedotov. UNODC has already launched seven regional programmes around the world. This year, will see three new regional programmes launched in the Caribbean, South Asia and Southern Africa.

Other speakers at the opening session include the Vice-Minister of Interior of Spain Luis Aguilera Ruiz, the Legal Advisor of the State Minister for Interior Affairs of Qatar Abdulla Yousof Al-Mal and the director of Europol, Rob Wainwright. The Crime Commission traditionally attracts around 800 representatives of Member States, non-governmental organizations and the media.

Programme of Side Events