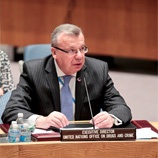 19 December 2013 - The importance of confronting illicit drugs in West Africa and the Sahel was underlined yesterday  at a Security Council briefing on this significant issue.

Organized by France, the current President of the Security Council, the event saw UN Secretary-General Ban Ki-moon and UNODC Executive Director Yury Fedotov, among others, deliver key statements on drug trafficking in West Africa and Sahel.

"Let us work together for dignity and a better sustainable future for all of the people of West Africa and the Sahel," said the Secretary-General in his statement.

Mr. Fedotov focused on West Africa and the Sahel's vulnerability to illicit drugs and crime due to complex challenges such as political instability, porous borders and the region's geographical size.

"The vast profits generated from these illicit flows undermine good governance and legitimate economies, and fuel corruption. The funds enable criminal organizations to maintain their operations and possibly support terrorist activities across West Africa and the Sahel.

Local drug use appears to have intensified, as have attendant health problems, including an increasing number of new HIV infections attributed to injecting drug use. These negative dynamics must be reversed," said Mr. Fedotov.

According to UNODC's assessments, some 33 tonnes of cocaine flowed through the region in 2010. From this amount, some 18 tonnes, worth approximately US$1.25 billion, is shipped to Europe. This provides organized crime syndicates with income far exceeding the national security budgets of many countries in the region.

Crystalline methamphetamine seized in East Asia has been found to have originated in West Africa. Large amounts of fraudulent medicines in the region pose a threat to public health and safety. Other challenges include migrant smuggling, trafficking in persons, firearms, cigarettes and gasoline, and maritime piracy in the Gulf of Guinea.

There was a general recognition of the urgency of the situation, said Mr. Fedotov. But he emphasized that capacities must be built up to improve regional cooperation in border control on land, at sea and in the air, as well as support penal systems, encourage judicial cooperation and promote fundamental human rights and development.

Mr. Fedotov also noted that recent reports on West Africa by the UN Secretary-General and a UN strategy for the Sahel explicitly recognized the importance of confronting illicit drugs and crime.