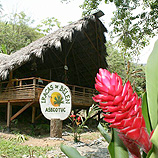 16 January 2013 - For many years, the region of Sierra Nevada de Santa Marta in the north of Colombia was known as an illicit crop cultivation hub. Since the mid-1990s, UNODC has been supporting the Government to help the region's farmers switch from illegal crops to licit activities with increasing success. The Gulf Guardian Families Project is an example of this, where local families have received support to cultivate alternative crops such as organic coffee and cocoa, and to produce honey and handicrafts for retail. Most recently, the project has helped boost local tourism through the creation of ecotourism lodges - an initiative that has proven particularly popular, feeding a growing demand for environmentally conscious alternatives to mass tourism.

The UNODC-supported ecotourism lodges lie amidst the Sierra Nevada de Santa Marta and the Gulf of Urabá on the Colombian Caribbean coast. The eight lodges have been created with the full participation of beneficiary families, who have played a part in planning, constructing and equipping them, and who now look after the lodges. Each offers a variety of options to experience the luxuriant local vegetation and biodiversity, such as hikes and canoeing, and visitors can also learn more about the life of the communities who support the project.

All lodges have received international recognition via the "Smart Voyager" programme, a sustainable tourism certification programme for tour operators and hotels in South America recognized by the United Nations Educational, Scientific and Cultural Organization (UNESCO).

The support to alternative livelihoods is a key element of UNODC's work in Colombia. As part of this, UNODC assists communities in investing in viable alternatives respectful of local conditions and customs so as to create a more permanent solution to the problem of illicit drugs. "The programme in the Sierra Nevada de Santa Marta has enjoyed great success" says UNODC Representative in Colombia Bo Mathiesen. "Figures from the Integrated System for Monitoring Illicit Crops (SIMCI) show that there are now less than 50 hectares of illicit crops in the region, giving us hope that the area will be virtually free of illegal crops in 2013."