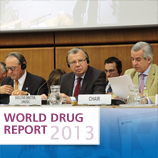 26 June 2013 - UNODC's Executive Director Yury Fedotov warned today at a special meeting of the Commission on Narcotic Drugs (CND) that the use of new psychoactive substances (NPS) is growing. He said concerted action was needed to prevent the manufacture, trafficking and abuse of these substances.

Noting the impact of drugs and crime on some fragile countries, Mr. Fedotov said, "…the drug trade and organized crime continue to fuel economic and political instability around the world." Afghanistan, in particular, requires the full support of the international community to prevent instability after the withdrawal of international forces in 2014 he said. In both West Africa and the Sahel regions, Mr. Fedotov stressed the need for greater assistance to prevent illicit drugs and crime hindering the progress of sustainable development.

Mr. Fedotov also noted that the international drug control conventions were helping to contain and stabilize the level of drug consumption, but said there were concerns about the violence generated by illicit drug trafficking, particularly, in Central America; as well as the fact that some national laws and practices could be vulnerable to human rights violations.

"The real issue, however, is not to amend the conventions, but to implement them according to their original spirit and intention. A first step towards achieving this goal is to recognize that the conventions were created to protect the health and welfare of mankind," said Mr. Fedotov. UNODC was also helping in this, he said, by promoting a balanced approach to illicit drugs founded on fundamental human rights and science-based prevention and treatment.

Mr. Fedotov was speaking at the opening of a special meeting of the CND to launch the UNODC flagship publication, the World Drug Report 2013. Also in attendance was UN Deputy Secretary-General, Jan Eliasson, who in his own opening speech said: "As we work to shape a global agenda for peace, development and human rights, let us address these drug and crime threats coherently and effectively for the benefit of all."

Other speakers included, the President of the Italian Senate, Pietro Grasso; Austrian State Secretary, Reinhold Lopatka; Director of the Federal Drug Control Service, Victor P. Ivanov; Director, Office of National Drug Control Policy, White House, Gil Kerlikowski; President of the International Narcotics Control Board, Raymond Yans; and Secretary General of the Organization for Cooperation and Security in Europe, Lamberto Zannier, among others. The special meeting was attended by the heads of some regional organizations, representatives of non-governmental organizations as well as journalists.

The launch of the World Drug Report 2013 took place on International Day against Drug Abuse and Illicit Trafficking. In his own statement released on that day, UNODC Executive Director, Yury Fedotov, said, "…the [international drug control] conventions are a powerful tool in the hands of the international community, but they need to be used in the right way, if the millions of victims of illicit drugs are to be helped."

In 2014, a high-level review of the Political Declaration and Plan of Action regarding the world drug problem will be conducted by the CND. It will be followed in 2016 by a UN General Assembly Special Session on the issue.

Poster: Categories of New Psychoative Substances sold in the market