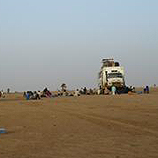 19 June 2013 - Representatives from Algeria, Burkina Faso, Chad, Libya, Mali, Mauritania, Morocco and Niger met last week in Ouagadougou, Burkina Faso, to agree on areas of cooperation for the next four and a half years to address the interconnected problems of drug trafficking, organized crime and terrorism that have plagued the region for the last decade. During a two-day long discussion, delegates agreed on a number of measures as part of a UNODC response strategy for the Sahel.

Speaking at the meeting in Ouagadougou Dr. Jêrome Bougouma, Minister for Territorial Administration and Security in Burkina Faso, welcomed the support given to the "UNODC Contribution to the UN Integrated Strategy for the Sahel" as a crucial step in kick starting the implementation of technical cooperation efforts in the region.

"Terrorism, drug trafficking, and transnational organized crime are the main reasons why the crisis that started two years ago in the Sahel has deteriorated further and caused the citizens of the region to live in insecurity and even be displaced", Dr. Bougouma said.

The Sahel stretches across several countries in West, Central and North Africa. The region faces a multitude of challenges brought upon by the illicit trafficking activities of organized criminal groups, some of which have possible links to terrorism. Illicit drugs, human beings, oil, cigarettes, counterfeit medicine, firearms and toxic waste are known to illegally transit the region. A few years ago, UNODC estimated that these major illicit flows were worth US$ 3.8 billion annually, a number much higher than the GDP of several West African countries. The destabilizing effect of such trafficking flows, as well as their impact on development and security in the Sahel and its environs are extremely serious, as recently seen in Algeria, Mali and Niger.

The objective of the UNODC response is to support the strengthening of accessible, efficient and accountable criminal justice and law enforcement systems and capacities to effectively combat organized crime, terrorism, corruption and impunity. The strategy focuses on national capacity building and regional cooperation in the areas of legislation; border control and interdiction, accountable and efficient investigation, prosecution and adjudication of criminal cases; scientific evidence in support of judicial investigations; and improved procedures, access and treatment in the judicial and prison systems.