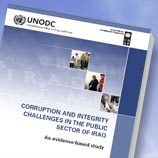 21 June 2013 - Corruption is one of the principal challenges facing the authorities in Iraq as the country attempts to lay the foundations of a new democratic system, according to a recent joint UNODC and UN Development Programme (UNDP) study. Despite recent progress to improve governance, corruption is a recurring and major concern in the daily lives of Iraqi citizens, it says.

The study "Corruption and Integrity Challenges in the Public Sector of Iraq" surveyed the type of corruption encountered in everyday interactions between users and providers of public services. It found that the prevalence of bribery among Iraqi citizens who had at least one contact with a public office was 11.6 per cent in a twelve-month period.

Almost half the respondents (45.8 per cent) said they pay bribes in order to speed up administrative procedures, while 26.6 per cent resort to bribery to receive better treatment and services.

On average, Iraqi bribe-payers pay almost four bribes a year, or one bribe every three months. Regional variations in the prevalence of bribery payments also exist: the highest risk of bribery is to be found - perhaps unsurprisingly - in the country's capital and power centre, Baghdad (prevalence of bribery at 29.3%).

Bribes were most frequently paid to nurses in public health facilities (19 per cent), public utility officers (15.5 per cent) and police officers (14.2 per cent) according to the study. Seen in a wider context, the presence of nurses and doctors in this group indicates significant problems in the equitable provision of health services in Iraq.

The study shows that a large share of citizens perceive corruption to be on the rise in the country: 54 per cent believe it to be more widespread than during the two previous years. Yet, only a small minority of bribe-payers (less than 5 per cent) actually report bribery incidents to the authorities. Moreover, although civil servants themselves have a duty to report attempted bribery, only a third of those offered bribes reported such incidents.

Lack of awareness of anti-corruption authorities as well as trust and confidence in their effectiveness are among the main reasons why corruption is not reported more frequently. Many civil servants are also afraid of retaliation and are concerned about the general lack of security and adequate protection for whistleblowers in the country. Two-thirds (66.3 per cent) of respondents said they would not feel adequately protected if they had to report an act of corruption within their own ministry.

The recruitment of civil servants also shows vulnerability to corruption. The report found that the influence of informal networks on recruitment practices and lack of transparency in procedures is great. 35 per cent of civil servants hired since 2009, for example, did not have to undergo any formal interviews or written exams to attain their positions, and 28 per cent of new recruits in the same period admitted to receiving improper assistance to facilitate their recruitment.

The report does, however, highlight some encouraging trends: the leading anti-corruption body in Iraq - the Commission of Integrity (CoI) - has progressively gained capacity and visibility since its establishment in 2004. The number of new reports about corruption received by CoI increased from 7,797 in 2009 to 12,520 in 2011, and over 90 per cent of reports lead to criminal investigations.

The increased number of people investigated, referred to court and convicted points to a heightened awareness of corruption in Iraq as well as greater capacity to fight it. Nevertheless, the study's findings attest to the need to strengthen capacities to tackle corrupt behaviour in Iraq.

Corruption and Integrity Challenges in the Public Sector or Iraq Study