UNODC signs joint plan of action with Japan for cooperation on Africa, Southeast Asia and Afghanistan 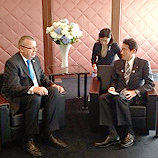 4 June 2013 - The Executive Director of UNODC, Yury Fedotov, welcomed the signing of a new Joint Plan of Action with Japan. Mr. Fedotov was in Japan to attend the Fifth Tokyo International Conference on African Development (TICAD V), which concluded in Yokohama on Monday, 3 June 2013.

In the action plan, UNODC and Japan pledge to enhance regional cooperation in Africa as well as in Southeast Asia, including Myanmar, and Afghanistan and neighbouring countries. The plan also identifies priority areas of cooperation, including terrorism, trafficking in drugs, human trafficking and cybercrime.

"The United Nations Office on Drugs and Crime and the Government of Japan have a long and fruitful history of cooperation across the globe, in areas ranging from countering illicit narcotic drugs, combating terrorism and strengthening crime prevention and criminal justice. I welcome this new Joint Plan of Action, which will serve to strengthen our efforts still further," said Mr. Fedotov.

He addressed participants at TICAD V, including a session on enhancing peace building efforts and a symposium on human security, emphasizing UNODC's integrated approach, working with regional partners in West Africa and the Sahel.

Mr. Fedotov referred to the recent UNODC Threat Assessment Report for West Africa, which highlighted the existence of methamphetamine production, cocaine and heroin trafficking, maritime piracy and smuggling of migrants, among other crimes.

"We know that insecurity and conflict fuel crime while drugs and crime fuel conflict and undermine security. Addressing these threats can contribute to building peace and promoting human security within and across regions," he said.