World Drug Report 2013 to be launched on Wednesday, 26 June 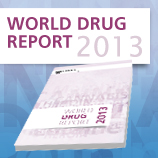 24 June 2013 - The World Drug Report 2013 will be launched during a special event of the fifty-sixth session of the Commission on Narcotic Drugs, devoted to the commemoration of the International Day against Drug Abuse and Illicit Trafficking which will be held on Wednesday, 26 June 2013.

The World Drug Report 2013 presents a comprehensive overview of the latest developments in drug markets, covering production, trafficking, consumption and related health consequences. This year's report contains new global data on the number of people who inject drugs and those who inject drugs and are also living with HIV, showing progress and setbacks during the 2008-2011 period.

The thematic focus of this year's report is on the phenomenon of new psychoactive substances (NPS), which can have deadly consequences for their users but are hard to control, with dynamic, fast-mutating producers and "product lines" which have emerged over the past decade. The report includes a review of different NPS categories identified and used around the world.

The special event will count with the participation of UNODC's Executive Director Yury Fedotov and high level delegates from several countries. The event will be held from 10 a.m. to 1 p.m. and from 3 to 6 p.m. in Boardroom D, in the C-Building of the Vienna International Centre.