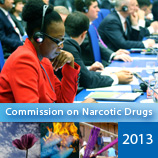 15 March 2013 - In a crowded auditorium at the end of the 56th Session of the Commission on Narcotic Drugs (CND), Yury Fedotov, the Executive Director of the United Nations Office on Drugs and Crime (UNODC), highlighted the importance of the CND within the framework of international drug control. He said the sessions of the Commission were the building blocks for crafting an international response to illicit drugs.

After congratulating civil society for its own contributions, Mr. Fedotov said UNODC had shown its own value at the 56th Session through its release of International Standards on Drug Use Prevention, which recognize that science-based prevention means working with families, schools and communities. He said these standards were an investment in the future of people. But, were much more than standards, they were another example of how UNODC places health, treatment and prevention, as well as human rights, at the forefront of its work.

"With each passing session, we add, we polish, and in so doing, we advance the ability of nations to confront illicit drugs, while also ensuring the availability of narcotic drugs and psychotropic substances for medical and scientific purposes. Our work is founded on shared responsibility for all the actions of the international community in this area," he said. Mr. Fedotov also said the duty of the international community was not based on "...national size, or economic strength, or even geography, but on the certainty that only international cooperation can assist the millions of people around the world who need our help."

This session of the CND revealed the broad diversity of this body's work through resolutions on new psychoactive substances, alternative development, HIV, and the shared responsibility of nations to counter illicit drugs, among many others.

The sessions of the Commission on Narcotic Drugs were attended by over 1,000 representatives of Member States, distinguished guests, and civil society organisations.

Fifty-sixth Session of the Commission on Narcotic Drugs