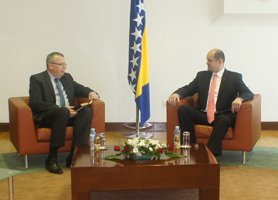 22 March 2013 - UNODC Executive Director Yury Fedotov completed a two-day mission today to meet the head and senior officials of ministries and agencies in Bosnia and Herzegovina. UNODC's work in the region is delivered through UNODC's Regional Programme for South-Eastern Europe. Launched last year, the regional programme is at the forefront of UNODC's efforts to counter the trafficking of illicit opiates from Afghanistan to the lucrative markets in western Europe via the so-called Balkan route.

During his visit, Mr. Fedotov said: "UNODC is building a coherent response to drugs, crime and terrorism, which views them as global phenomena needing global solutions. To achieve this we are introducing integrated programmes that deliver effective assistance. As we continue with this strategy we will use our core strengths in analysis, technical assistance and helping to build capacities to support the Member States who confront these challenges."

Based on UNODC's estimates, around 60 tons of heroin, worth US$13 billion, moves along the Balkan route to west and central Europe. For this reason, the Balkan route remains the main trafficking route for illicit drugs connecting Afghanistan to Europe. Largely a transit country for illicit drugs, in 2011, the Bosnia and Herzegovina authorities reported the following seizures: 10.2 kg of heroin, 444 kg of marijuana, 0.3 kg of cocaine and 9.2 kg of amphetamines.

UNODC provides technical assistance and helps build capacities in Bosnia and Herzegovina in a number of areas. Regarding drug prevention, UNODC has provided training for experts from the country, particularly in the use of quality standards. UNODC has also published surveys on corruption in Bosnia and Herzegovina, as well as the region. A new survey on how corruption and crime affects the business sector is currently being drafted.

To help stem the flow of illicit drugs, UNODC is also seeking to extend the joint UNODC/World Customs Organization Global Container Control Programme to Bosnia and Herzegovina. The programme would include a Bosnian port.

Towards the end of the mission, Mr. Fedotov said: "Our goal in South Eastern Europe is to work closely with Member States to counter transnational organized crime, corruption, money laundering, terrorism and drug abuse. I am very glad that Bosnia and Herzegovina continues to be such a strong partner for UNODC in all these areas."

Corruption in Bosnia and Herzegovina