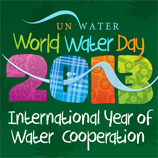 22 March 2013 - World Water Day is held annually on 22 March as a way to focus attention on the importance of freshwater and advocating for the sustainable management of freshwater resources. Each year, World Water Day highlights a specific aspect of freshwater, and in 2013, it is dedicated to the theme of cooperation around water. While water is not one of the core UNODC topics, the Office has highlighted the detrimental effects of corruption on freshwater management.

Corruption in the water sector is a major concern in many ways. Whether we talk about water for energy, for drinking purposes or for sanitation, water as a commodity is a basic human need. Sadly, it is also one that millions of people struggle daily to meet. When money gets diverted for personal gain, people continue to rely on insecure and polluted water sources for hygiene, drinking and food preparation.

The water sector is particularly vulnerable to corruption for several reasons, the most prominent of which is the vast number of players in this area, including those from the various tiers of public service and the private sector. When big money is involved and there is a lack of transparency, the negotiation of contracts, allocations, agreements and licenses are affected.

Corruption can also increase the costs of building water infrastructure by as much as 40 per cent, according to the UN Development Programme. This equates to an additional $12 billion a year needed to provide worldwide safe drinking water and sanitation.

Large water infrastructure projects such as dams, canals, tunnels, wells and drains are also highly lucrative and much coveted. Hydro-electric power for example, which requires large investments and highly complex engineering works, is an area that can attract unscrupulous operators and give rise to corruption in procurement processes.

UNODC's efforts to promote the United Nations Convention against Corruption and assist countries to fully implement its provisions will foster increased resilience to corruption in the freshwater sector and beyond.

Fact sheet on corruption and the environment (pdf)