Corruption is the thief of economic and social development, says UNODC Chief at anti-corruption opening in Panama 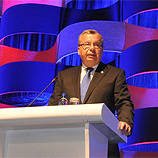 "Corruption is the thief of economic and social development; stealing the opportunities of ordinary people to progress and to prosper," said UNODC Chief, Yury Fedotov, at the opening of the Fifth Session of the Conference of States Parties to the UN Convention against Corruption in Panama City - COSP5.

Emphasizing connections between corruption and sustainable development Mr. Fedotov said that corruption was not simply a crime, it was the instigator of other criminal activities such as transnational organized crime and drug trafficking.

"Without corruption and bribery," Mr. Fedotov said, "millions of women, children and men cannot be trafficked as slaves; thousands of small arms cannot reach their violent destinations; and tons of illicit drugs cannot reach their consumers." The rule of law is also increasingly being recognized as the foundation for transparency and accountability, and the enabler of sustainable development he said.

Corruption has a devastating impact across the world. It is estimated by the World Bank that, every year,  between US$20 to US$40 billion dollars are lost from developing countries due to corruption and bribery. The environment also suffers: Costs of water infrastructure are increased by corruption by as much as 40 per cent which equates to an additional US$12 billion a year needed to provide worldwide safe drinking water and sanitation

But Mr. Fedotov stressed that it would take everyone's voice raised against corruption to bring true success. "We need a robust and strong coalition of governments, business community, civil society, academia and media to resist corruption, and build a culture of prevention and integrity," he said.

President of Panama, Ricardo Martinelli, in his own opening speech, emphasized the importance of confronting corruption. He said: "The UN Convention against Corruption allows us to work together to confront one of the greatest challenges we face as a global community."

Held in Panama City, the week-long COSP5 is the world's largest biennial anti-corruption event drawing together over 1,500 participants from Member States, civil society, private sector academia and the media to discuss best practices and successes in the fight against corruption under the umbrella of UNCAC.

The convention now has 168 states parties and has gone further than any other UN Convention through its unique Review Mechanism that, after four years, has trained more than 1,400 anti-corruption experts and provided assistance to 35 States to amend their legislation.