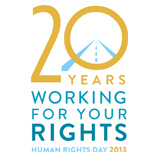 "The outcome of the Vienna Conference twenty years ago has given us the tools to pursue human rights in a more active and assertive way" said Yury Fedotov,  Executive Director of UNODC. "The principles enshrined in the Declaration and Plan of Action help connect our efforts here at the United Nations at Vienna to focus on people, advocate the well-being of the individual by underpinning all our work here".  Mr. Fedotov referred to the protection of health and welfare, including of people who use drugs and are living with HIV; victims of human trafficking and violence against women; or the work with States to uphold the rule of law and fight corruption.

UNODC mandates in supporting implementation of the UN conventions related to drugs, crime, corruption and terrorism have direct human rights implications. UNODC works to bolster Member States' capacities to address transnational threats as a way to promote the rule of law, which is conducive to the protection of human rights.  Below are the main areas of work.

Health is the cornerstone of drug policy. Drug abuse is an illness affecting around 25 million problem drug users worldwide. UNODC helps to address vulnerability by promoting science-based, humane and voluntary treatment for drug dependence. To lessen the adverse consequences caused by drugs, UNODC advocates a comprehensive package of measures to reduce vulnerability, treat the drug illness, and prevent the spread of diseases associated with drug use, like HIV and hepatitis.

UNODC has succeeded in bringing about recognition that those subjected to trafficking and migrant smuggling are victims rather than criminals. The victim-centred approach is designed to address the root causes that push victims to fall prey in the hands of criminals.  A Voluntary Trust Fund for the Victims of Trafficking in Persons, Especially Women and Children managed by UNODC, has been set up to provide humanitarian, legal and financial aid to victims. The Fund's Small Grants Facility established in 2011 brings direct assistance to those affected by this crime.

UNODC promotes the rule of law, a pre-requisite for the enjoyment of inalienable human rights, by tackling corruption and promoting good governance. In developing countries, corruption contributes to the theft of development assistance from the world's poorest people; billions of dollars urgently needed for health care, education, clean water and infrastructure are drained through bribes. Citizens are denied their basic needs and rights. The UN is taking action through the UN Convention against Corruption, which contains strong measures to boost integrity, which are applicable to both the public and private sectors.