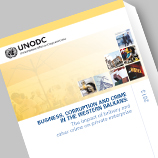 24 October 2013 - The United Nations Office on Drugs and Crime (UNODC) and the European Commission (EC) jointly released today a survey showing that corruption plays a significant role in the daily business of many companies in the western Balkans. Based on interviews with more than 12,700 companies, the survey shows that corruption is the third biggest obstacle to doing business in the region. On average, one in ten businesses that had contact with public officials paid bribes over a 12-month period.

The survey 'Business, Corruption and Crime in the western Balkans: The impact of bribery and other crime on private enterprise' shows that different patterns of bribery  exist across the region. The percentage of businesses experiencing bribery over a 12-month period is high in Serbia (17 per cent) and Albania (15.7 per cent), while more bribes are paid by businesses in Croatia (8.8 bribes per year) and in Kosovo* (7.7 bribes per year). The most expensive bribes are paid in Kosovo (average 1,787 EUR per bribe) and Serbia (average 935 EUR per bribe).

At the regional level, over one-third (35.7 per cent) of bribes to public officials are paid in cash, at a hefty average of 880 EUR per bribe. Food and drink (33.6 per cent) are the next most popular form of payment, followed by other goods in exchange for a "favour" (21 per cent).

The frequency and prevalence of bribery are substantially higher among small businesses than larger ones, as well as among those companies in which foreign capital has been invested (16.6 per cent) than among those with no foreign capital.

The building and construction is the sector most seriously affected, with 12.2 per cent of respondents confirming that they had paid a bribe to a public official. This is followed by businesses in the wholesale and retail trade sector (10.3 per cent), transportation and storage (9.9 per cent), manufacturing, electricity, gas, and water supply (9.2 per cent) and accommodation and food services (9 per cent).

The largest shares of bribes are paid to local public officials (municipal or provincial officers) and to officials in tax and customs administration, suggesting that bribery is commonly used for tax evasion, which could have a potential negative impact on public finances.

The survey highlights that corruption, together with crime, place a considerable burden on the economic development of the region. Looking at the region as a whole, 5.9 per cent of businesses decided not to make a major investment in the 12 months prior to the survey due to fear of having to pay bribes, while 9.1 per cent decided not to make a major investment due to fear of crime.

The most common purpose for paying bribes is to "speed up business-related procedures" (40.3 per cent of all bribes), with businesses citing "better treatment" (14.1 per cent) and "making the finalization of a procedure possible" (12.7 per cent) as other reasons. Interestingly, as much as 18.1 per cent of bribes paid serve no specific immediate purpose, but are given as "sweeteners" to public officials to "groom" them for future interactions.

The perceived normality of bribery among businesses in the region is reflected in low reporting rates - as little as 1.8 per cent of bribes paid by businesses are reported to official authorities. The main reasons cited are that reporting is considered "pointless", or that bribes are "common practice" or "a sign of gratitude".

The European Commission-funded report on private enterprise follows UNODC's 2011 survey of bribery and other forms of corruption as experienced by private households in the western Balkans. "Better data on corruption and crime are vital to create appropriate policies to tackle these issues, and authorities in the western Balkans should be commended for taking up the task of better understanding the extent and nature of these crimes in the region", said Mr. Chawla.

* All references to Kosovo shall be understood to be in the context of Security Council resolution 1244 (1999).

Business, Corruption and Crime in the western Balkans: The impact of bribery and other crime on private enterprise