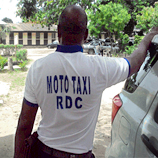 17 September 2013 - Since mid-2012, UNODC's small grants scheme has assisted a number of African-based civil society organizations (CSOs) across the continent in developing innovative anti-corruption projects. With applications now open for the third round of funding, the grants scheme has helped CSOs from a range of countries tackle corruption within the private sector, particularly amongst small and medium-sized enterprises (SMEs).

Some of the past successes, due in part to the small grants scheme, attest to the important role of civil society in this area.

In the Democratic Republic of the Congo for instance, a grant to the Observatory to Fight against Corruption in Central Africa (OLCAC) helped formalize motorcycle taxis into a union. The initiative significantly improved the work of motorcycle taxi drivers, who were too often unaware of their rights in areas such as road safety and the commercial aspects of their business which made them vulnerable to bribery. Through the organization of workshops involving drivers, government officials, and traffic police representatives, as well as media campaigns in local newspapers, OLCAC managed to raise-awareness and inform motorcycle taxi drivers of their rights and the need to reject corrupt practices.

Further north, the Tunisian watchdog organization I-WATCH facilitated the formation of an all-inclusive, national network of civil society organizations to fight corruption, including with members of the private sector. I-WATCH also produced cartoon videos to explain the United Nations Convention against Corruption (UNCAC) to young people and social media users, and trained over 120 business students on the Convention and the importance of ethical business.

The Cameroon-based Reflection and Concrete Actions for Africa Development (RECAAD) trained member companies to master the UNCAC, its review mechanism, and the national framework to fight corruption in the country's private sector. RECAAD developed a Code of Conduct for the private sector and an action plan in line with the National Anti-Corruption Strategy, and carried out awareness-raising activities to inform people about the Convention and its use to businesses.

In Sierra Leone, the national chapter of Transparency International used the grant to fund a project targeting medium- and small-scale businesses, particularly those run by women and migrants, in order to increase engagement between different civil society actors to combat corruption. As a result, a continuous dialogue was established with members of the national Indigenous Business Association and the Sierra Leone Contractors Union to promote fair trade, competition and ethical behaviour. The project also trained beneficiaries on the UNCAC and the anti-corruption laws of Sierra Leone.

Meanwhile in Mozambique, the Mozambican Association for Development and Democracy (AMODE) organized round table discussions on the UNCAC with representatives from civil society, the private sector and local authorities. The discussions were significant as they represented the first time the country's private sector engaged in anti-corruption activities related to the Convention. Radio discussions and the creation of a national network of civil society organizations to fight corruption further helped bring attention to the issue to the wider Mozambican society.

UNODC's small grants scheme is designed to assist civil society organizations in their engagement with the private sector in anti-corruption activities. Applications are now open for the current round of small grants for African-based CSOs. The deadline is 27 September 2013 and more information is available from UNODC's Civil Society team via ngo.unit(at)unodc.org.

UNODC's activities with civil society in the fight against corruption