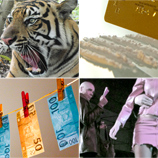 2 October 2013 - Transnational organized crime is big business, generating an estimated $870 billion in profits a year and countless victims. Ten years ago, the first global international instrument to combat it - the United Nations Convention against Transnational Organized Crime and its three supplementing Protocols - entered into force, demonstrating the commitment of the international community to tackle this challenge.

There are many activities that can be characterized as transnational organized crime: illicit drug trafficking, smuggling of migrants, human trafficking, money-laundering, illicit trafficking in firearms, wildlife and cultural property. Every year, countless lives are lost as a result of organized crime, through drug-related health problems and violence, firearm deaths and the unscrupulous methods and motives of human traffickers and migrant smugglers, among others.

With almost universal adoption, the Convention is a landmark achievement that offers its 178 State parties a cooperation framework to fight the scourge of organized crime. States that ratify the instrument commit themselves to a series of measures, including the creation of domestic criminal offences (participation in an organized criminal group, money laundering, corruption and obstruction of justice); the adoption of frameworks for extradition, mutual legal assistance and law enforcement cooperation; and the promotion of training and technical assistance for building or upgrading the necessary capacity of national authorities.

The Convention also has several important Protocols. The Protocol to Prevent, Suppress and Punish Trafficking in Persons, especially Women and Children, is the first global legally binding instrument with an agreed definition on trafficking in persons.  This allows for consistency around the world on the phenomenon of trafficking, and facilitates the establishment of domestic legislation to investigate and prosecute cases. The Protocol also stipulates important measures to protect victims with full respect for their human rights.

Similarly, the Protocol against the Smuggling of Migrants by Land, Sea and Air is the first international instrument to provide a definition of smuggling of migrants, as well as measures to protect the rights of smuggled migrants in order to prevent their additional exploitation.

As the guardian of the Convention, UNODC has a vital role to play in assisting States in translating their commitments into action, in mainstreaming related criminal justice and security mandates into the UN system, and in raising global awareness of this problem.

UNODC's multi-language campaign against transnational organized crime consists of a 30- and 60-second public service announcement, a set of posters, a series of fact sheets and various online banners. All materials are available through the campaign website: www.unodc.org/toc.