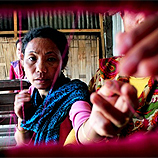 23 April 2014 - UNODC, together with UNAIDS, UNICEF and UNDP, has established a project to reduce the risk and impact of HIV/AIDS in the north east region of India, an ethnically diverse area bordering Myanmar and Bangladesh. Building on years of experience on similar efforts, this project aims to help local communities prevent the spread of HIV through unsafe injecting drug use, especially among vulnerable populations -of which women represent a large part.

D. B., 37, has used drugs since she was 25 and after many attempts at quitting, she succeeded in 2013. She now works as a peer educator in a local NGO supported by this project, providing harm reduction services to women who inject drugs. She holds meetings and talks about the use of disposable syringes and other safety methods, such as the use of disinfectant swabs in order to avoid blood-borne infections such as HIV and hepatitis C. Her work is important, she says, because girls are mostly considered inferior to boys, and dependence on drugs increases their vulnerability. That is why, she adds, they find it easier to approach the local drop-in centre -a safe place where they can get services- as it caters to women only.

Working with civil society and community based organizations is what keeps the project strong by linking it to those vulnerable women who are in real need but are often not visible. In the state of Nagaland, this joint initiative has developed fruitful partnerships with local churches, which have incorporated HIV/AIDS awareness and sex education in their curricula to spread these messages to the less well-served rural areas. They also discuss the stigma and discrimination faced by people living with HIV/AIDS within their congregations and the need for acceptance. Lucy, a church-goer from the local community, describes how this approach in her congregation helped diminish the discrimination and stigma so that people who once stayed away now return to the services.

The project also provides assistance for the early detection of HIV and supports initiatives to help children infected or affected by HIV/AIDS to have access to treatment, education and other support. Anuka, 8, from Dimapur, lost his parents when he was one year old, and has been taken care of ever since by his widowed grandmother. One of the project's affiliated local churches supports Anuka's school costs. Thus, his grandmother can better look after him -and herself- through her small retail business.

UNODC works on HIV prevention, treatment and care for people who use drugs and for people living in prison settings. Together with other co-sponsors of UNAIDS, national and international partners, including civil society organizations, UNODC assists countries to achieve universal access to comprehensive HIV services, which are gender sensitive, and human rights and public health centred.

Watch the video on this north eastern India project for more stories.