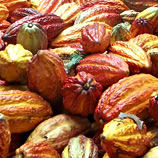 13 August 2014 - UNODC works across the world to assist Member States in developing drug control policies which prevent and reduce the cultivation of illicit drug crops, such as coca bush and opium poppy. Lacking viable alternatives, farmers in some isolated and poor communities grow illicit crops. This is due to insufficient income from legal activities, a lack of access to markets, conflict, unproductive land and an absence of basic infrastructure.

Alternative development projects provide small-scale farmers with badly needed sources of income in order to reduce their dependence on growing coca plants. In Colombia, the UNODC-supported Montebravo project, grouping together local farmers associations, exported its first 12 tons of cocoa to the French luxury chocolate maker Valrhona. This shipment resulted from the work of more than 1,200 families who replaced illicit crops for an alternative, licit source of income.

Valrhona officials visited in 2013, where they met representatives of the Montebravo project in the department of Chocó. Regarding the shipment, which was exported last May, Algemiro Gallego, Executive Director of the Montebravo association, said: "it was a little difficult, but certainly, more exports to this company are a possibility. We must strive, however, to maintain the quality and commitment to our customers in France". He added: "There is indeed a future: it is clear that we do not know everything, but we will learn."

The project falls under UNODC's Forest Warden Families programme, which puts forests to sustainable and productive uses, while at the same time improving food security. This approach has an immediate impact on the welfare of families. The Montebravo project, set up to help decrease economic dependence on coca leaf production in the region, brings together 11 farmers associations, which manage about 1,700 hectares of cocoa. Producers include members of the Kuna indigenous people, Colombians of African descent, and displaced persons.

Julieth Osorio Gómez, a Montebravo marketing official, pointed out the benefits of exporting cocoa to Europe: "This export made our farmers very happy. In Colombia you do not get better prices for sustainably sourced and certified products, so exporting them fetches better prices and that is really important for the producers."