16 December 2014 - A partnership between the Colombian and Austrian governments, UNODC, and the Austrian fair trade chocolate manufacturer Zotter has just been launched, with the introduction of a new premium chocolate bar - branded as Labooko - Kolumbien Kakao 75%. This is part of the UNODC-supported Montebravo project in Colombia, which provides small-scale farmers with badly needed sources of income in order to reduce their dependence on illicit drug crops.

The Zotter partnership allows 1250 farmer families from the Chocó region of Colombia to move away from illicit crop cultivation and into commercially viable livelihoods, generating markedly higher incomes than those made illegally. "The Chocó beans meet our very tough organic and fair trade standards, and I look forward to a long-lasting and mutually beneficial partnership with the farmers", said chocolatier Josef Zotter at the launch. 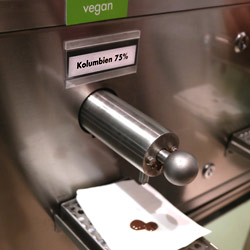 The project is part of a wider Colombian National Alternative Development Programme, supported by UNODC, which reaches over 120,000 farmer families. "The viability of alternative sources of income ultimately depends on products that actually sell in national and export markets. Thanks to Zotter and all the partners in this initiative, this is what is happening," said UNODC Deputy Executive Director, Aldo Lale-Demoz at the event, which took place at the Zotter factory in Graz, Austria.

Jaime Alberto Cabal, Colombian Ambassador to Austria, highlighted the importance of close collaboration by all partners to realise projects like these, while Andreas Liebmann, representing the Austrian Foreign Ministry, said this initiative was a win-win situation, adding that he "was happy Austrian financial support was effectively used in such an alliance for the benefit of chocolate lovers."

The Montebravo project, set up to help decrease economic dependence on coca leaf production in the region, brings together 10 farmers associations, which manage about 1,200 hectares of cocoa. Producers include members of the Kuna indigenous people, Colombians of African descent, and displaced persons. This latest partnership has been supported by the governments of Austria, France, Switzerland and the regional government of Antioquia in Colombia.