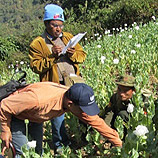 The report states that Myanmar remains Southeast Asia's top opium producer - and the world's second largest after Afghanistan. Together, Myanmar and Lao PDR produced an estimated 762 metric tons of opium, most of which - using smuggled precursor chemicals like acetyl anhydride - was refined into an estimated 76 tons of heroin and then trafficked to markets in neighbouring countries and outside the region.

Transnational crime groups are receiving profitable incentives due to the region's large demand for heroin. There is a two-way trade involving chemicals going in and heroin coming out of the Golden Triangle, challenging stability and the rule of law in the region. Not only are they bringing in the chemicals needed to make heroin, but are also are trafficking and distributing the drug to markets in China, Southeast Asia and other parts of the world.

Economic surveys that were part of the report point out that for farmers in poppy-growing villages, the money generated from poppy crop cultivation is essential to prevent food insecurity and poverty, which illustrates the link between poverty, lack of alternative economic opportunities, and poppy cultivation.

The report also warned that the opium business and trade threatens regional integration. Development plans are underway to expand transport connections, and reduce trade barriers and border controls, including around opium producing areas. This carries the risk of providing organized crime networks opportunities to take advantage of the regional integration process.