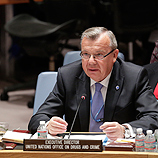 26 June 2014 - Following yesterday's debate in the Security Council Chamber on the situation in Afghanistan, the Council published a Presidential Statement (S/PRST/2014/12) stressing the need for continued action against illicit drug trafficking.

The statement noted: "The Security Council recognizes the threat posed by the production, trade, trafficking of illicit drugs to international peace and stability in different regions of the world and the important role played by UNODC in this regard."

UNODC welcomes the Presidential Statement and remains committed to promoting cooperation on drug control at every level, while countering drug supply and demand through a balanced approach emphasizing fundamental human rights.

The Council also expressed its concern at the "increase in poppy cultivation" and the need "to address drug-production and trafficking, in cooperation with relevant international and regional actors".

UNODC, as the lead organisation within the UN system on illicit drugs and organized crime, is at the forefront of efforts to assist Afghanistan against this transnational challenge.

UNODC will continue to work closely with all its partners, and in doing so, contribute to the peace, development and stability of Afghanistan and West and Central Asia.

Summary of the Security Council debate and the Presidential Statement