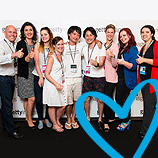 20 June 2014 - At the first ever Young Lions PR Competition, held during the annual Cannes Lions International Festival of Creativity, UNODC challenged contestants to engage today's youth into becoming campaigners to end human trafficking. 14 teams from across the world were given 24 hours to devise a public relations (PR) strategy to raise the profile of UNODC's Blue Heart Campaign against Human Trafficking in the lead up to the first World Day against Trafficking in Persons, to be marked on 30 July 2014.

The challenge was to take the current Blue Heart Campaign and angle it to appeal to a younger audience, driving the conversation online to encourage young people to recognize the importance of eradicating this crime and provide support to its victims. All work created during the competition was judged by the Young Lions PR jury for gold, silver and bronze awards, and later exhibited at the Festival.

Ideas abounded: with passion and drive, the young creatives came up with strategies to make the campaign speak to their 'peers', embracing social media use by millenials and using props - 'selfies', songs, interactive maps, travelling chests and clever PR stunts - to drive attention to the issue. Some of these strategies will now be used by UNODC to help raise awareness and mark the first World Day against Trafficking in Persons.

The bronze Lion went to the Austrian team, Pepita Adelmann and Doris Christina Steiner, the silver Lion awarded to the UK team, Leila Mountford and Kate Sloan, and gold to Yuichiro Okada and Tetsuya Umeda from Japan.

With millions of victims, human trafficking affects every country in the world. UNODC's Blue Heart Campaign seeks to encourage involvement and inspire action to help to stop human trafficking. It allows people to show solidarity with the victims by wearing the Blue Heart - an international symbol against human trafficking - and encourages action among all sectors of society to halt this crime that shames us all.