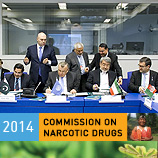 17 March 2014 - The trafficking in Afghan opiates poses serious challenges to public health and international security not only in the country's immediate region, but also in other parts of the world. Multilateral efforts facilitated by UNODC, such as its Regional Programme for Afghanistan and Neighbouring Countries, are strengthened by strategic alliances to counter the flow of drugs out of Afghanistan and by bringing together officials from the countries most affected by this illicit trade.

One of these efforts is the Triangular Initiative formed by Afghanistan, Iran and Pakistan. The Initiative, launched in 2007, coordinates the efforts of its member states against the threat of opiates flowing from Afghanistan, as well as other forms of transnational organised crime. Activities supported by the Initiative include joint patrolling and border control operations, and the use of liaison officers to ensure greater intelligence and information sharing between the three countries, as well as cooperation to better track illicit financial flows.

Speaking at a ministerial review of the Triangular Initiative held last week in Vienna, UNODC Executive Director Yury Fedotov commended countries for their successes, such as recent seizures of more than one tonne of different types of drugs in January and February of this year. He noted, however, that Member States needed to "continue strengthening and expanding trust to support cooperation in this area" and that "addressing maritime trafficking routes is an issue of increasing urgency."

Another important alliance in the region is the Afghanistan, Kyrgyzstan and Tajikistan Initiative (AKT), which aims to strengthen the effectiveness of joint counter-trafficking operations in these countries and takes advantage of the UNODC-supported Central Asian Regional Information and Coordination Centre (CARICC). At the ministerial review meeting of the AKT Initiative, held concurrently with the 57 th session of the Commission of Narcotic Drugs on 17 March, the three countries announced plans to strengthen the border posts as well as their drug liaison officers network. An example of their work are the nine operations conducted between the three countries in 2013 and that resulted in the seizure of almost half a tonne of different types of drugs including opium, heroin and cannabis.

UNODC's 2013 Afghanistan Opium Survey highlighted that Afghanistan's cultivated surface for this plant had increased by a record 36 per cent, while opium production had risen by 49 per cent. Regional and inter-regional cooperation initiatives such as these are therefore crucial to stemming the flow of opiates out of Afghanistan and fostering stability in Central Asia.