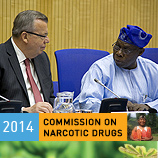 21 March 2014 - Drug consumption and the impact of trafficking on governance, security and development in West Africa was highlighted this week at an event organized by the West Africa Commission on Drugs (WACD) and the International Drug Policy Consortium (IDPC).

Held on the side-lines of the Commission on Narcotic Drugs (CND), the event was addressed by UNODC Executive Director Yury Fedotov, the former President of Nigeria and current Chair of the WACD President Olusegun Obasanjo, and WACD Commissioner Mohammad-Mahmoud Ould Mohamedou.

Discussing the vulnerability of West Africa to illicit drug trafficking, and as a spillover effect, increased drug use in the region, Mr. Fedotov noted: "The trafficking of cocaine remains a serious challenge and there has been an increase in the amount of heroin trafficked into the region, especially since 2010. Methamphetamine production in West Africa is rising while trafficking of ephedrine is a matter of serious concern. Meanwhile, local drug use appears to have intensified, including the growing use of crack cocaine, heroin and amphetamine-type stimulants. This has become an issue for public health and safety, with an attendant rise in the number of new HIV infections attributed to injecting drug use".

President Obasanjo meanwhile warned of "developments (that) pose serious threats to peace and security in West Africa", referring to the organized crime syndicates who use the region as a hub to transit drugs to other parts of the world. He additionally noted the importance of stepping up actions to end drug-related user problems in the region, calling for funding to be more proportionately directed towards health, treatment and rehabilitation services, which are lacking. This was similarly expressed by Mr. Fedotov who, while calling for additional support to stop drug trafficking, pointed to the urgent need "to address demand and facilitate quality treatment and rehabilitation services."

Dr. Ould Mohamedou also discussed the health repercussions of drugs in West Africa and noted that while the region has historically been considered a transit destination, indications show that consumption is climbing, particularly among youth, as is the local production of drugs such as cannabis.

All three participants highlighted the need to tackle the underlying socio-economic factors if a lasting solution is to be found. President Obasanjo and Dr. Ould Mohamedou noted that, with high levels of poverty and unemployment, more jobs are needed as young people in particular might regard drug trafficking as an attractive income generating opportunity.

The event concluded with a brief overview of an upcoming WACD report which will be launched in mid-2014. The report, which builds on existing initiatives and will include a list of policy recommendations, focuses on both demand (drug use) and supply (drug trafficking) and has been developed in collaboration with a range of actors working in this area. This includes regional leaders, law enforcement officials, civil society organizations, and bodies such as the Economic Community of West African States (ECOWAS), the African Union (AU) and UNODC.