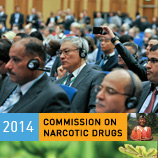 14 March 2014 - Member States issued a Joint Ministerial Statement today at the close of the High-level Review highlighting the importance of health, prevention and treatment, including protection against HIV, as envisaged by the conventions.

In his closing statement, the Executive Director of the UN Office on Drugs and Crime (UNODC), Yury Fedotov said, "I believe this Joint Ministerial Statement provides a strong basis to continue this forward-looking debate on the road to the UN General Assembly Special Session on the world drug problem in 2016."

The UNODC Executive Director delivered his closing remarks before permanent representatives, civil society and the media. Mr. Fedotov told the audience he welcomed the Joint Ministerial Statement and was also grateful for the support and appreciation expressed by Member States for the efforts of UNODC - the lead body in the UN system for countering the world drug problem.

The Statement, he said, recognizes the progress that has been achieved, while acknowledging persisting and new challenges with respect to demand and supply reduction as well as with countering money laundering and promoting judicial cooperation.

Speaking at a press conference earlier in the afternoon, Mr. Fedotov said, "The provisions of the conventions are indeed flexible, human rights based, and founded on the protection of health. I would like to stress particularly the need of strengthening the public health in a comprehensive, balanced, scientific evidence-based approach, that is very important, and fully consistent with human rights standards."

He followed this by saying, "I would like also to say that no country is immune from the impact of illicit drugs, and that no country acting in isolation can find solutions. That is why we must encourage broad international coordination and cooperation when facing this global challenge. And as a part of the UN, as part of the UN secretariat, UNODC is prepared to play its role."

The two-day High-level Review follows a UN General Assembly resolution in December 2012. Discussion of the world drug problem will now move on to the Economic and Social Council before Member States meet in New York in 2016 at a special session of the General Assembly.