3 November 2014 - The UN Voluntary Trust Fund for Victims of Trafficking in Persons received a U$ 250,000 boost in donations yesterday from the private sector at a fund-raising event in Vienna, attended by Secretary-General Ban Ki-moon, Austrian Foreign Minister Sebastian Kurz, UNODC Executive Director Yury Fedotov and fashion designer Vivienne Westwood. Proceeds from the event will go directly to grassroots organizations that rescue, shelter and reintegrate victims into society.

The event was organized by Austrian businessman and philanthropist Ali Rahimi, who,  since 2013, has been an active supporter of the Trust Fund and UNODC's Blue Heart Campaign against Human Trafficking. A special carpet, donated by The Rug Company and using iconic Vivienne Westwood graphics as well as the words STOP HUMAN TRAFFICKING and the designer's signature in support of the campaign, was auctioned at the event.

Human trafficking affects every country in the world. Victims are trafficked for sexual exploitation and forced labour. UNODC figures show that women and girls make up 75 per cent of detected victims, with girls constituting two out of every three child victims. 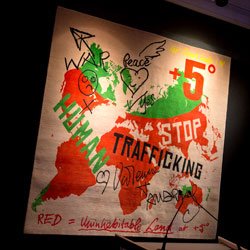 "This callous crime touches almost every aspect of modern existence, from the clothes people wear to the meals they eat. Its victims …suffer terrible conditions [and] their individual stories are marked by pain, suffering and inhumanity. When these narratives are taken together, they form a tragedy that shames the world" said Secretary-General Ban Ki-moon at the event.

Established in 2010, the UN Trust Fund provides direct assistance to grass-roots organizations that support victims and survivors of human trafficking around the world. In 2013, the Fund provided support to around 2,000 victims, especially women and children.

"The UN Trust Fund transforms victims into survivors. It offers safe houses, legal support and treatment for physical and mental abuse. It enables people to obtain job training, and children to get an education. These may seem like small steps forward in the lives of individuals, but they add up to a global march toward progress" said the Secretary-General.

The support to the victims, the Secretary-General continued, "will deliver a clear message to the world: that people are not property, and children are not commodities, and we stand together in solidarity for them."