From drug addiction to top-flight rugby: the therapeutic power of social integration 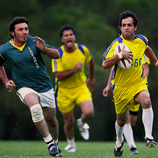 09 April 2015 - The positive effect that sport can have on social, mental and physical health is widely recognized, and is being used to great effect by Congress 60, an NGO working with recovering and recovered drug users in Iran. Congress 60 has built upon the social integration effects of sports to complement the process of drug treatment and rehabilitation for many years and encourages its members to take part in sports activities as a routine part of its ongoing recovery programmes. The NGO has a number of sports clubs specializing in different disciplines including rugby, football, volleyball, archery and wrestling, and some members even go on to compete at a national level.

The Congress 60 Rugby Club has been a continuous presence in Iranian rugby for over 10 years, and was ranked first in the Premier League Rugby Fifteens Tournament in December 2014, and took second place in the Sevens Tournament held in Lorestan province in early-2014.

Members of the Congress 60 team have in the past used drugs such as  amphetamine-type stimulants (ATS) and heroin.  With the support Congress 60, they are now able to more fully participate in life activities such as sports, which was not possible while actively using drugs.

The value of sports, as a component of social reintegration, in the process of recovery from substance abuse disorders was recognized by Congress 60 through their hands-on experience. The NGO suggests that with the right approach and identifying suitable sports for each individual, positive steps can be taken to support treatment and long-term recovery.

Congress 60 is one of the most prominent NGOs involved in the treatment of drug use. It was founded in 1999 by Hossein Dejakam, who is himself a recovered drug user. Congress 60 operates more than 40 treatment centres where treatment services are provided free-of-charge to more than 30,000 members. The NGO does not utilize outside funding but relies exclusively on the membership fees and contributions of its own members. UNODC has provided drug demand reduction training and capacity building support to Congress 60.

UNODC in the Islamic Republic of Iran