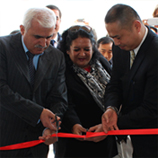 27 April 2015 - As part of a regional approach to address drug trafficking in Central Asia, a new UNODC-supported Border Liaison Office (BLO) was recently opened between Afghanistan and Tajikistan at the Nizhny Panj checkpoint. The facility will allow for direct communication between the countries' border control agencies and is aimed at stemming the flow of illegal drugs.

With border control agencies in Central Asia often ill-equipped to identify and stop illegal movements in a comprehensive manner, regional and inter-regional cooperation initiatives such as these are crucial. This is particularly relevant with regard to stemming the flow of opiates out of Afghanistan which, according to UNODC's latest figures, currently supplies some 93 per cent of the world's opium. The capacity of each country's law enforcement agencies also varies considerably, and most border agencies lack clear mechanisms for law enforcement information sharing.

The BLO has been established as part of UNODC's wider work aimed at countering Afghan opiate trafficking via the northern route, which links northern Afghanistan with the countries of Central Asia. There are four additional BLOs in operation along the border between Uzbekistan and Tajikistan, a key cross-border communication and coordination effort.

At the opening ceremony, the Tajikistan Border Guard Deputy Commander, Radjab Makhmadaliev, highlighted the serious threat posed by drug trafficking, noting that it required a strong response. The Afghanistan Border Police representative, Fazelbari Fazlee, meanwhile said that the BLO mechanism through information sharing and face to face meetings helped improve cooperation between the countries. UNODC's work in countering drugs and transnational organized crime in the region includes promoting cooperation between countries by enhancing the capacity of law enforcement officers, improving infrastructure of selected Border Crossing Points (BCPs), and providing specialized equipment amongst others.