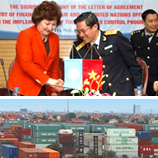 10 February 2015 - Each year an estimated 600 million container movements, accounting for some 90 per cent of the world's cargo, take place globally. Half of these containers have their origin, transit route or destination in the countries of Southeast Asia. The large volume of containers, and the speed of handling them, is a challenge to the law enforcement agencies trying to identify illicit shipments in this supply chain. In principle, most of the containers are virtually uninspected, allowing consignments of drugs, weapons and other illegal goods to enter countries undetected. In 2004, the UNODC-World Customs Organization (WCO) Container Control Programme was established to assist in countering these threats, and this week Viet Nam became the latest country to formally join following a signing ceremony held at the Vietnamese customs headquarters in Hanoi.

Speaking at the signing, Viet Nam's Deputy Director General of Customs, Nguyen Duong Thai, noted: "The global Container Control Programme will provide training to improve the capacity of customs officers at Hai Phong Port to detect and deal with seized goods in order to improve security and reduce the risk of drugs, weapons and explosives trafficking. I hope this serves as a model and a solid basis to expand this Programme not only in Hai Phong Port but also to other major sea, land and airports in Viet Nam."

UNODC's Representative, Zhuldyz Akisheva, meanwhile spoke of the importance of the establishment of the Container Control Programme in the country: "This is a historic moment for Viet Nam, reconfirming its commitment to counter illicit trafficking of goods across its borders."

The global Container Control Programme was established to tackle shipments of illegal goods by pooling the strengths of customs and other law enforcement bodies. The Programme operates through the establishment of specialised port control units, which work to better secure the global supply chain.

Since its inception, the Programme has established more than 30 control units, leading to significantly increased detections and confiscation of drugs and other illicit goods. In the past decade, this has included more than 100 metric tons (mt) of cocaine, 3 mt of heroin, 60 mt of cannabis, and 1,273 mt of precursor chemicals used to manufacture illicit drugs, as well as cigarettes, luxury cars, medicines, electronic waste, hazardous materials and wildlife.