More than a game: Combating corruption through mobile apps 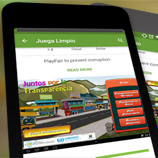 15 June 2015 - A free mobile application comprising seven games aimed at promoting a culture of transparency and integrity among children has been launched by UNODC and Bolivia's anti-corruption and transparency ministry. The newly released games, which are available now on both the Apple and Android platforms, are called Play Fair (or Juega Limpio in Spanish) and provide children and teenagers with information on corruption, transparency and integrity. The app was developed based on existing games designed for public spaces such as parks, squares, and fairs, and are part of an initiative launched in 2011 where users can learn about issues of corruption through dynamic and fun tools.

The first four games - Transparency against corruption; Discovering crimes; The anti-corruption mouse; and Fighting corruption: a right and an obligation - cover the basic concepts of corruption, present the institutions involved in anti-corruption efforts, and teach users about the crimes associated with corruption together with the duties and responsibilities of society in combating this scourge. The additional games, which are designed to be used by multiple players at once, are titled Against corruption, our participation; The wheel of access to information; and BINGO! Let's eliminate corruption. These three games promote the concept of transparency and access to information, the ways in which society can take part in solving corruption issues, and review and test the knowledge acquired.

Praising the innovative focus of the initiative, UNODC's Representative in Bolivia, Antonino De Leo, mentioned that society cannot leave combating corruption solely to the law. "This tool will bear its fruits in the years to come and we are convinced that we rightly chose prevention as the path to build a culture of integrity and transparency." Bolivia's Minister of Anti-corruption and Transparency, Lenny Valdivia, meanwhile stressed that education and prevention, as two of the main pillars of structural change, represent an efficient method to promote good practices and transparent actions in countering corruption.

As innovative educational tools, the apps can help teachers and mentors raise awareness on integrity, transparency and the rule of law among children and teenagers, thereby strengthening civic values as a means of preventing corruption.

The mobile application is available for both the Android and Apple platforms: simply search for 'Juega Limpio Ministerio de Transparencia Bolivia' on Google Play or the App Store.

Web version of the app for browsers