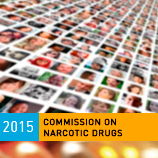 11 March 2015 - A special event was held this week as part of the 58th Commission on Narcotic Drugs (CND) to address the prevailing stigma with regard to drug use disorders. Over several years, UNODC has worked to build up an understanding of drug dependence as a health disorder with many complex factors. The event highlighted the need for evidence-based drug dependence treatment and care and showcased good practices from around the world.

UNODC Executive Director Yury Fedotov opened the session noting the important role attitudes play in effective treatment and care, including overcoming the stigma often attached to substance use disorders: "This means looking beyond the statistics and seeing not the addict, not the drug user, not the patient, but the human being who needs our help." He added, "For UNODC, it is essential to focus on the human dimension - the men, women and children affected by drug use and dependence, and all of the consequences for health and society that illicit drugs can have."

This was echoed by Gilberto Gerra, Chief of the Drug Prevention & Health Branch of UNODC, moderator of the session. Dr. Gerra explained that his inspiration for the title of the event and the event itself, was the parents of patients for whom the value of their sons and daughters did not diminish simply because they were struggling with substance use.  He added that "institutions should treat people as they would their own families."

The Director of National Drug Control Policy (ONDCP), Michael Botticelli, explained the evolving strategy in the US to address the issues of drug problems, saying: "Central to our strategy is understanding that people and families affected by substance use disorders need care and respect. Historically, policies have been based on the idea that people with substance use disorders were morally flawed and lacked willpower, this elicited a very punitive response to the problem. Now we have an incredible body of evidence that this is clearly a disease of the brain and requires a targeted health response."

The challenge of stigmatization was a recurring theme of this special session. Mr. Botticelli added that "if we're serious about breaking stigma we have to promote people in recovery and give them a voice. Providing opportunities for people in recovery to be visible has a dramatic effect in reducing stigma."

Nora Volkow, Executive Director of the US National Institute on Drug Abuse (NIDA) was also present at the session as a representative of the Scientific Network. She shared recommendations currently being discussed as part of the ongoing Scientific Network, deliberating during the 2015 Commission.

Xiaojun Wei, Deputy Secretary General of the China National Narcotics Control Commission (NNCC) and Deputy Head of Chinese Delegation to this year's CND explained his country's approach to substance abuse: "Our philosophy is to regard drug users as victims and people who should be treated equally to others in society. The Chinese Government places great importance on rehabilitation and employment opportunities for those in recovery."

The session also included a signing ceremony of the joint UNODC-WHO Programme on Drug Dependence Treatment and Care. Upon their signatures, Aldo Lale-Demoz, Deputy Executive Director of UNODC, and WHO Assistant Director-General for Non-communicable Diseases and Mental Health, Oleg Chestnov made the extension of the Programme official through 2018. Speaking at the event, Dr. Chestnov had two key messages: firstly that "healthcare service is a cornerstone of the public health response to the drug problem (and) we must make sure that people who need therapy are not neglected." And secondly, citing the positive results already experienced in tackling tobacco and alcohol abuse, that "we need to change the balance and use more public health efforts in our activities."

Adding their voices to the discussion, and co-sponsoring the event, were Esbjorn Hornberg, Chair of Civil Society Task Force for UNGASS and acting Chairperson of the Vienna NGO Committee on Drugs, and Heather Haase, Chairperson of the New York NGO Committee on Drugs and one of the Vice-Chairs of the Civil Society Task Force for UNGASS. Mr. Hornberg highlighted the "need for open debate including those affected by drug policies" adding, "we need to ensure that our focus is balanced and takes into account key UN treaties. The Universal Declaration of Fundamental Rights and Freedoms, and the Convention on the Rights of the Child are extremely important commitments, that we must keep at the forefront of our collective efforts". He also stated that "prevention, treatment and harm reduction are equally important to law enforcement but are still secondary in debates."

Ms. Haase took the opportunity to call for the support of Member States for the Task Force: "We have worked very hard to bring together this stellar group of civil society representatives. They were chosen not just for their expertise but also for their devotion to the cause and commitment to the work. We know that they will do their part to bring in civil society actors from all over the world to contribute to the UNGASS process. I respectfully take this opportunity to ask Member States to do their part as well."

H.E. Shaikh Abdulla bin Rashid Al-Khalifa, Governor of the Southern Governorate of Bahrain, agreed that the treatment of persons with drug use disorders must follow scientific evidence and ethical medical practice, no different from the approach to any other disease.

Explaining the approach in Bahrain he said:  "While it is necessary to deal with the criminal networks involved, it is important not to overlook the human element. Substance dependence for us is a multi-faceted disease and most importantly it is treatable. Users should be respected and offered help with their disease. This is the basic minimum that any Government should provide so that everyone counts."

The Head of Mental Health/Substance Abuse Department, Ministry of Health in Brazil, Roberto Tykanori, meanwhile took the opportunity to present a case study of the De Braços Abertos ('With Open Arms') project in São Paulo. Borrowing inspiration from projects around the world, particularly the Housing First initiative in the US, the project reclaimed a city block known as 'crack land' by providing unconditional housing, counselling and access to health and education for more than 1,500 people who had occupied the area.

The united message, clearly presented by all speakers, was the critical importance of treating all persons affected by drug use disorders with respect.

The Special Event was organized jointly by the Government of the United States of America, the World Health Organization, the UNODC Prevention, Treatment and Rehabilitation Section and the Vienna NGO Committee as well as the New York NGO Committee on Drugs.