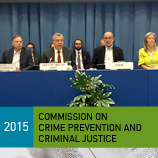 22 May 2015 - Terrorism, migrant smuggling and trafficking in cultural property are some of the world's most daunting challenges, UNODC Executive Director Yury Fedotov said today.

"The magnitude of the problems we face is such that it is sometimes hard to imagine how any effort can be enough to confront them. But to quote Nelson Mandela, 'It always seems impossible until it is done.' We must keep working together, until it is done."

Speaking at the closing of the 24th Session of the Commission on Crime Prevention and Criminal Justice (Crime Commission), Mr. Fedotov said the recent seizure of the ancient UNESCO world heritage site of Palmyra by ISIL/Daesh was "an alarming development that comes at terrible cost in human life, and threatens a UNESCO site that is an invaluable part of our common human heritage".

He informed the audience that, just last year, the Crime Commission had passed international guidelines for crime prevention and criminal justice responses to trafficking in cultural property. A new resolution passed this year at the Crime Congress in Doha, Mr. Fedotov said, would take further steps to prevent criminals and terrorists profiting from the looting of the world's historical sites.

On smuggling of migrants, Mr. Fedotov noted, "The migrant crisis in the Mediterranean, the Andaman Sea and elsewhere continues to unfold, and the lives of too many vulnerable women, men and children remain at risk."

UNODC would also continue to help countries confront the challenges of terrorism, including the flow of foreign terrorist fighters, he said. "This remains a top priority for us, and I hope we can rely on [Member States] to help us."

The Crime Commission brought together as many as 1,000 delegates from Member States, non-governmental organizations and civil society, including several high-level speakers. This year, nine resolutions were passed, including one on the UN standard minimum rules for the treatment of prisoners (known as the "Mandela rules"). More than 30 side events on a wide range of crime prevention and criminal justice topics were also held, as well as numerous exhibitions.

Resolutions passed at this year's Commission