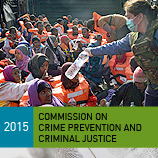 18 May 2015 - The Mediterranean Sea is one of the main routes for the smuggling of migrants, an activity which generates billions of dollars a year for criminal networks. Along this route, appalling tragedies have been occurring almost daily, as vulnerable women, children and men place their lives in the hands of organized criminals in order to reach Europe.

At a side event during the 24th Crime Commission, participants addressed the different aspects of migrant smuggling, including law enforcement efforts and the way countries in the region can cooperate against the organizations involved in this crime. During the meeting, entitled 'Protecting migrants at sea and addressing the smuggling of migrants. The Italian experience', experts addressed the human rights of smuggled migrants, and the rescue operations across the Mediterranean.

During the event, UNODC Executive Director Yury Fedotov emphasized the importance of the UN Organized Crime Convention, in particular its Protocol dealing with migrant smuggling. This instrument, he noted, "seeks to prevent and combat migrant smuggling, promote cooperation to this end and protect the rights of smuggled migrants. In order to achieve this, the Protocol requires States Parties to make migrant smuggling a criminal offence."

Participants stressed the importance of this issue and encouraged closer cooperation among the countries of the Mediterranean region to face the challenges posed by the smuggling of migrants out of Africa and the Middle East.

The discussion panel, which included Italian judicial and naval representatives, shared their experiences regarding rescue efforts at sea, handling migrant smuggling cases in the legal system, and countering transnational organized crime groups involved in this activity, all while following international good practices and standards.

Simona Ragazzi, an Italian judge in Sicily involved in the prosecution of migrant smugglers, discussed her country's experience in this regard. Local and regional authorities in her country, she noted, have apprehended and prosecuted criminals who smuggle migrants, leading to the arrest and conviction of hundreds of perpetrators both for smuggling and for participating in criminal groups.

Migrant smuggling affects almost every country in the world. It undermines the integrity of countries and communities, and costs thousands of people their lives every year. UNODC provides States with technical assistance in order to enhance their response to this crime through the implementation of the UN Organized Crime Convention, and especially its Smuggling of Migrants Protocol.