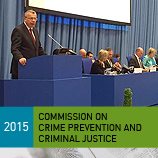 In his opening speech at the 24th Session of the Commission on Crime Prevention and Criminal Justice (CCPCJ), the UNODC Chief said he had been horrified during the 13th Crime Congress in Doha in April this year by news reports of migrants dying when their boats sank in the Mediterranean.

"Since then," said Mr. Fedotov, "thousands more migrants and refugees have died all over the world, on treacherous journeys to reach their destinations, often at the hands of criminal smuggling groups. We cannot let this situation continue."

Experience has shown, Mr. Fedotov said, that the UN Convention on Transnational Organized Crime, and its protocol on migrant smuggling, can be effective against the smuggling networks which exploit the migrants.

But, the Executive Director said, all of "our policies must be coherent, and our responses integrated and inclusive, uniting countries of origin, transit and destination, based on the principle of shared responsibility".

The 24th Session of the Commission runs from 18 to 22 May in Vienna and attracts around 1,000 representatives of Member States and civil society. During the five days of the Crime Commission there will be one special event on foreign terrorist fighters, around nine draft resolutions, more than 30 side events and a series of exhibitions.

Other speakers at the opening included Luis Alfonso de Alba, the Mexican Ambassador and Chairperson of the 24th Session of the Commission, and Sheila Abed, the Minister of Justice of Paraguay.

24th Session of the Commission on Crime Prevention and Criminal Justice