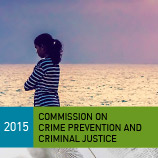 20 May 2015 - Voicing concern over the continued killing of women and girls, the United Nations anti-crime chief issued a strong call to end such acts, as well as to unravel the gender bias at the heart of the "dreadful daily experiences of violence" that blight so many of their lives.

"Violence against women and girls, in all its many forms, shames us all," UNODC Executive Director Yury Fedotov said in a statement issued in Vienna during the  24th Session of the Commission on Crime Prevention and Criminal Justice, which opened this week and runs through 21 May.

According to UNODC, women and girls continue to be killed in large numbers worldwide. In 2012, for example, at least 43,000 women were murdered by their intimate partners or family members.

Yet such crime is only the most visible and brutal sign of what is happening to millions of women. Hidden from our view, Mr. Fedotov said, are the dreadful daily experiences of violence that blight the lives of women and girls.

Such experiences, including terrible sexual violence, occur in the countryside and cities; as well as in schools, work places and especially the home.

"We must also acknowledge that, just as no society is immune from these violent acts, we are all part of the solution," Mr. Fedotov underscored, adding that "no woman or young girl must be allowed to feel isolated or in danger."

Therefore, not only should societies provide women with much needed security, but also offer them opportunity, equality and prosperity.

Citing efforts to tackle crime against women and girls, Mr. Fedotov said UNODC is working to unravel the gender bias that has been woven into many legislations and criminal justice systems, and which perpetuates impunity for these violent acts.

He also called for all those in the criminal justice system to respect and protect women and girls and to view domestic violence as a serious crime.

"To end this serious crime, we must all work in a spirit of partnership and cooperation to change laws, change perceptions and change behaviours," declared Mr. Fedotov, warning that if no action is taken "we will continue to see this violent crime undermine our efforts to build better, more inclusive societies."

UNODC's work on gender in the criminal justice system

Statement by UNODC's Executive Director on violence against women and girls

24th Session of the Crime Commission