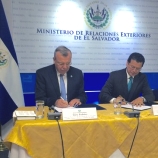 "Over the last 20 years successive Salvadoran governments have worked tirelessly to combat organized crime. I note that El Salvador has called for the UN's support in these efforts. As the head of the Office on Drugs and Crime, I want President Cerén to know that I have heard that call, and we stand ready to provide every possible assistance," said Mr. Fedotov.

Prior to the UNODC Chief's meeting with President Cerén, he delivered a key note speech at a high-level conference on tourism and security involving Central American countries and the Dominican Republic.

Mr. Fedotov, in his speech, acknowledged tourism as "an enormous force for good in the world; it powers economic growth, job creation and development." But, he went on to say, "tourism may be used by criminals to exploit people through trafficking, especially young and vulnerable children."

The UNODC Executive Director said there was a strong need to work on achieving the Sustainable Development Goals to counter this threat.

He emphasized the importance of delivering on Goal 16, which focuses on access to justice, and effective, accountable and inclusive institutions. "If we are to make tourism sustainable, if we are to build the resilience of communities to trafficking, we must promote a strong rule of law and effective criminal justice systems," said Mr. Fedotov.

Tourism and security have emerged in recent years as crucial issues in the region. At the 66th session of the UN General Assembly, Honduras coordinated a new resolution entitled "Sustainable Tourism and Sustainable Development in Central America." There have also been a series of events on this issue, including workshops, held in the region.

Mr. Fedotov later signed a detailed Memorandum of Understanding with the Minister of Foreign Affairs Hugo Martinez. The MoU is designed to strengthen the existing strategic partnership between UNODC and El Salvador, as well as increase the drug and crime body's presence in the country with the arrival of new experts on corruption and money laundering.

As part of the mission, Mr. Fedotov held a lunchtime meeting with representatives from various ministries on a range of drug and crime issues. He also met with the Attorney-General of El Salvador Luis Antonio Martínez and the Secretary General of the Central American Integration System (SICA) Victoria Marina de Avilés.