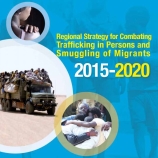 7 September, 2015 - UNODC recently launched its Regional Strategy for Combating Trafficking in Persons and Smuggling of Migrants in West and Central Africa. With these two regions considered points of origin, transit and destination for victims of human trafficking and smuggling of migrants, the new Regional Strategy aims to assist the affected countries in dismantling the criminal networks while at the same time protecting the victims of these crimes.

By some estimates, in the first half of 2015 almost 2,000 migrants died in the Mediterranean Sea while trying to reach European coasts. Most of the migrants pay large sums of money to organized crime networks exploiting their vulnerability. As part of an illegal industry which generates billions of dollars in profits annually, thousands of persons from West and Central African, a number of them children, are also trafficked every year for sexual exploitation, forced labour, organ trafficking, or as child soldiers.

In a statement delivered at the Strategy's launch, UNODC Executive Director Yury Fedotov highlighted the low conviction rate reflecting the impunity still associated with these crimes and called for a global synergy among stakeholders, whether they are members of Governments, parliamentarians, prosecutors or representatives from civil society and the private sector.

Through its West and Central Africa office based in Dakar, Senegal, UNODC regularly supports national and regional efforts against human trafficking and migrant smuggling. The Office helps countries in the region to produce and implement laws and strategies in line with the UN Convention against Transnational Organized Crime and the protocols related to these criminal activities.