#ADeadlyBusiness Campaign, drawing attention to the plight of smuggled migrants, presented at OAS 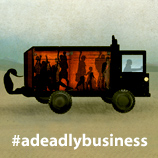 12 April 2016 - Early in 2016, Umud, a young man from Turkey, was approached by a smuggler who offered to take him to the Americas in exchange for a $15,000 fee. Due to his pressing need to leave his country in the hope of a better and safer life, Umud paid the smuggler. A couple of days later he was on a flight to Moscow where his journey was just starting. He was then smuggled across borders and between continents for several weeks until he arrived in Cuba and eventually, after crossing the Caribbean Sea, he reached Central America.

Umud then traversed the Central American migrant corridor by horse, foot and bus; on arrival to the Guatemala-Mexico border he was asked for an extra payment of $4,000 to continue the journey. Having no other option, he gathered the requested amount and was then transported by boat to Oaxaca, Mexico.

Umud's story reflects the complexity of migrant smuggling networks. Operating across a variety of countries and utilizing a range of legal and illegal methods, these transactions generate thousands of dollars for the smugglers, who profit from people's vulnerability. With this in mind, UNODC's office in Mexico recently launched, in partnership with the Government of Mexico, an awareness raising campaign entitled "Smuggling of migrants: #ADeadlyBusiness". The campaign seeks to draw attention to this violent business, which also supports other forms of organized crime. The campaign also serves as a mechanism to warn vulnerable migrants of the risks involved in using smuggling networks.

The smuggling of migrants is a transnational crime - in Umud's case, smuggling networks have been detected throughout the American continent. In this regard, UNODC's office in Mexico recently presented this initiative to the Committee on Hemispheric Security of the Organization of American States in Washington D.C.

Speaking to delegates of countries in the Americas, UNODC Representative in Mexico, Antonio Mazzitelli, pointed out that in-order to stop the deadly business of migrant smuggling, it is necessary to take concrete and comprehensive steps to prevent and disrupt this crime at the earliest possible stage. "Prevention can only succeed if there is a strong cooperation and support between countries of origin, transit and destination".

Regarding the campaign, UNODC's Regional Adviser, Felipe de la Torre, explained that this effort was conceived with a global vision; the people and settings involved can be found across all countries and regions. "Thus, the campaign's scope is international and can be easily be adapted for any country."