Critical role of science in the development of balanced, health-oriented drug policy covered at UNGASS 2016 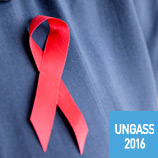 18 April 2016 - On the sidelines of the UN General Assembly Special Session on the World Drug Problem (UNGASS) currently on in New York, scientists today presented key findings and recommendations on HIV prevention, treatment and care among people who use drugs.

Speaking at the event, UNODC Deputy Executive Director, Aldo Lale-Demoz, noted: "Science today has become an essential partner to develop balanced, evidence-based, effective and humane drug policies. This is particularly important if we want to prevent new HIV infections among people who use drugs and end AIDS by 2030."

Sharing of injecting equipment are key drivers of HIV and hepatitis C epidemics and their ongoing spread among people who inject drugs, according to the scientists at today's event. Evidence also points towards a positive association between stimulant use, sexual and injecting risk behaviours, and HIV infections. However, as the findings reveal, there remains a significant discrepancy between what science has shown actually works, and what in reality is being implemented in countries most affected by HIV and hepatitis C.

Mathematical models and other scientific tools are available to inform decision making, said the scientists in their statements, who urged that these tools be increasingly applied in the development of policies and programmes in the field of drug use and HIV.

Recognizing that every new HIV infection implies future cost for life-long treatment of HIV and opportunistic infections, the statements underlined that it is important for countries to review spending on HIV, health and wider drug control programmes to ensure that resources can be reallocated to evidence-based interventions.

The side event was co-sponsored by Romania, Germany, Kazakhstan, Norway, and Switzerland, and by UNODC, the Joint United Nations Programme on HIV/AIDS (UNAIDS), and the World Health Organization (WHO). It was co-chaired by Mr. Lale-Demoz, and Cătălin Negoi Niță, Head of the Office of International Relations, National Anti-drug Agency, Romania.