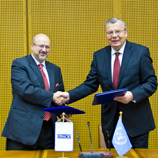 9 March 2016 - In a meeting of senior officials at the Vienna International Centre today, UNODC and the Organization for Security and Co-operation in Europe (OSCE) surveyed past results of their partnership and agreed upon a new Joint Action Plan for future cooperation.

During welcoming remarks, UNODC Executive Director, Yury Fedotov, stated, "the Joint Action Plan provides a welcome framework for UNODC and the OSCE to leverage their respective strengths." The new plan, he said, has been successfully expanded from seven  to eight key areas and now includes police development and reform.

In his own statement, the OSCE Secretary General, Lamberto Zannier, said, "As a regional security organization under Chapter VIII of the UN Charter, the OSCE supports the implementation of key UN policies and decisions in our region. Our relations with UNODC have been particularly close over recent years. I am therefore very happy to sign the latest update of our biannual OSCE-UNODC Joint Action Plan today. Drawing on our respective comparative advantages, it will guide our cooperation in 2016-2017."

Calling on UNODC and the OSCE to draw on their comparative advantages to develop joint activities, the new action plan focuses on a number of key thematic areas including terrorism prevention, trafficking in persons, migrant smuggling, firearms, corruption, money laundering and fighting illicit drugs.

Mr. Fedotov, in his statement, acknowledged the importance of counter-terrorism cooperation between the two organizations. He said, "countering terrorism remains a priority, and I very much welcome the new joint Plan of Action's focus on emerging security challenges, including foreign terrorist fighters and their radicalization; violent extremism and terrorism financing."

On the subjects of human trafficking and migrant smuggling, Mr. Fedotov said a heavy focus on the criminals networks was needed, particularly in view of the ongoing migration and refugee crisis. The UNODC Executive Director also stressed that chasing the money was critical to confronting transnational threats and he congratulated the UNODC/OSCE joint capacity building activities planned for this year.

UNODC maintains close cooperation with the OSCE on a broad range of threats and challenges, and the two organizations have been meeting at the senior level for several years. The partnership was formalised in 2010 when Mr. Fedotov met with the then head of the OSCE, Secretary General Marc Perrin de Brichambaut, to agree on a Joint Plan of Action.